Tyranny via Integrity Commissioner in Halton 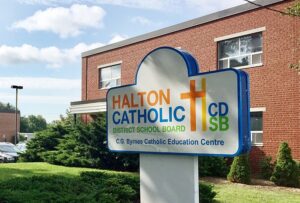 TORONTO – The kindest thing one can say about some of The Halton Catholic District School Board (HCDSB) Trustees is that they are preparing for election day October 24, 2022. Everything they say and do must be seen through a political lens.

Somehow, they have convinced themselves that the road to re-election is to persist in the unnecessary and malicious character assassination they attempted to execute on one of their colleagues at the last Board meeting. One who has been on medical leave since early in this calendar year due to a serious surgical intervention.

Boards and their trustees have a statutory obligation examine projections for revenues and expenses (primarily as derived from the numbers of students they serve) prior to sending the official documents to the Ministry for the appropriate Grants for student needs. Some woke trustees took exception to the thorough nature of the questioning by trustee Vincent Iantomasi in December of 2021.

They were offended that he was doing his job: to allocate your tax dollars as they were intended, responsibly for the education of your children; secondly, to hold the operational component of the Board – the Director and his/her staff – accountable for projections and expenses. The meetings, on the public record, are/were available to those who have more that a passing interest in how approximately $400,000,000. Of their dollars are spent and by whom.

Instead, led by a Director who is now off to Toronto’s St. Michael’s College School, and a new Chair, Marvin Duarte, the wokist group on the Board directed the Integrity Commissioner (IC) to “investigate” how they had been offended by Iantomasi’s penetrating line of questioning.

One can guess the result. Instead of calling in for a forensic audit, Daly, Duarte and their allies decided on a frontal attack to shut down accountability. Who are their allies? A prickly bunch whose agenda seems to be anything but Education – Catholic or otherwise.

In no particular order, they include Nancy Guzzo who is still facing twelve (12) counts of Fraud, three of them for sums over $10,000. She has not had the decency to recuse herself from meetings even as a fair-minded individual might have called for her outright dismissal, seeing as she has thumbed her nose at the Court system for these last three years. Another is former Chair Murphy, who when asked why he did not suggest to her that her recusal might be in order, answered he could not see any reason for it.

Then there is the “flag-waverer” Brenda Agnew whose only objective is to declare anyone on the Board who disagrees with her wokism as a Dinosaur. She is a part of a group publicly dedicated to cleansing the board of any colleagues who may still be catholic (in a Catholic Board) or who insists on procedural and fiscal probity. And finally, Janet O’Hearn-Czarnota who has yet to declare whether she is “fish or fowl” but carries Agnew’s water bucket.

The Minister should cause a forensic audit to be effected and consider placing the Board under Supervision (take it over until the mess is cleaned up).

Tonight, true to form, these five will present a Privacy Commissioner’s report (thanks to their bungling, made available to Corriere Canadese) intended to embarrass Iantomasi and to load the severest of sanctions on him so that he might not be in a position to proposed penetrating questions at the next Budget presentations after the October 24 election. The ploy succeeds only in bringing shame to the IC and the HCDSB for its juvenile assertions.

Now for the proverbial cherry on the cake: timing issues under the Municipal Act render it impossible, illegal, to invoke and apply sanctions within 90 days of the election day. The calendar says today is day 89.

How many statutory and regulatory measures need they defy before the Minister slaps forensic audit and Supervision on them?