Underneath the Façade of Wolf Warrior Diplomacy, Xi’s China is Running Out of Options 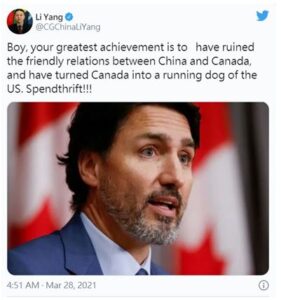 A senior Chinese Diplomat called Prime Minister Justin Trudeau “boy” and Canada “a running dog” of the US on Twitter recently.  “Boy, your greatest achievement is to have ruined the friendly relations between China and Canada and have turned Canada into a running dog of the U.S.,” tweeted Li Yang, China’s consul-general to Rio de Janeiro on March 28th.

For those who are unfamiliar with the term “running dog” in the West, it is part of the revolutionary vernacular during Mao’s era. The English equivalent of “running dog” is “lickspittle”.  Strange as it maybe for a Chinese diplomat thousands of miles and a half hemisphere away from Canada to behave like this, the West is getting a prime time viewing of what China’s much-touted “Wolf Warrior Diplomacy” looks like. China’s combative diplomats have often been dubbed “wolf warriors” about a nationalistic Chinese action film. This new style of diplomacy closely mirrors Chinese President Xi Jinping’s world view and ideology. In his important speech at the opening ceremony of the training class for young and middle-aged cadres at the Central Party School (National School of Administration), General Secretary Xi Jinping emphasized, “Dare to fight is the distinctive character of our party. Our party has relied on the struggle to reach today, and must rely on the struggle to win in the future” (http://www.qstheory.cn/wp/2021-03/03/c_1127161791.htm ). But the West should not be intimidated by them. Not even one little bit.

First, China’s brass knuckles tactics towards Canada have made absolutely no difference in the case of Huawei’s CFO Meng Wanzhou. Since the arrest of Meng Wanzhou on the request of the US, China snatched two Canadian hostages, imposed sanctions on Canada’s soybeans, canola seeds and pork. However, British Columbia judge dismissed Meng’s request to be discharged from the extradition process after ruling the case against her satisfies the “double criminality” test, which states countries may only extradite someone on an allegation that is a criminal offence in their own jurisdiction. (https://www.bccourts.ca/jdb-txt/sc/20/07/2020BCSC0785.htm)  These sanctions from China had no bearing on the Canadian judiciary process.  In 2020, due the outbreak of the deadly COVID-19, China resumed the import of Canadian soybean and canola seeds on its own because it faced a severe food shortage and just could no longer hold out. (https://www.huffingtonpost.ca/entry/china-canada-canola_ca_5e833e37c5b6d38d98a4e9d9)

China’s own interests in the European Union are hurt by its abashed diplomacy too. After a yearlong spread of shifting the origin of COVID-19 to Germany, Italy and Spain (https://apnews.com/article/china-coronavirus-origin-65c6958bb2d8d22d811bb3d0c90f7418) and China’s dismal human rights abuse on the treatment of its Uyghur Muslims, the EU halted the ratification of its comprehensive investment agreement with China. China’s Ministry of Commerce has led the effort to negotiate this agreement for eight years with the EU. France also summoned China’s ambassador Lu Shaye over “unacceptable” insults. Lu Shaye was China’s former ambassador to Canada. He was highly critical of Canada’s arrest of Meng Wanzhou.

In an era of chaos, from COVID-19 to ever-escalating tensions between China and The West, Chinese envoys and state media have gone on the attack. Ambassadors and official mouthpieces have threatened and insulted governments and elected politicians on just about every continent. But wolf warrior diplomacy is an insult to the real wolf warriors because it produces no desirable outcome for the West or China. According to a PEW Research poll in 2020, unfavourable views of China reached new highs in many countries. (https://www.pewresearch.org/global/2020/10/06/unfavorable-views-of-china-reach-historic-highs-in-many-countries/) On average, 78% of people surveyed do not trust China’s President Xi Jinping to do the right thing in world affairs. Wolf warrior diplomacy could also be an indicator of a power struggle within China’s Ministry of Foreign Affairs. Chinese diplomats feel the pressure to out-compete each other to climb the party’s advancement ladder. China’s domestic audience is hungry for news like its Consul General Li Yang trolling Canada and Prime Minister Trudeau. China is running out of tools in its toolbox. At the end of the day, fighting as a lone wolf is a risky foreign policy. The US Trade Representative Katherine Tai just announced on March 21st that they will not immediately remove tariffs on China. Saddled with its own social grievances and a set of sanctions slapped on by the EU and the US, China is running out of options.