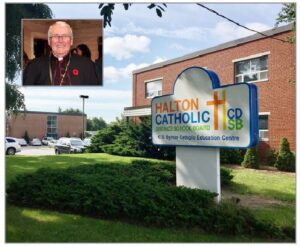 TORONTO – The Halton Catholic District School Board election may turn out to be a test of the legitimacy of our electoral system, everywhere in the province. It is no exaggeration. Concerned parents are beginning to react to what they perceive to be a theft of their Constitutional right to have a say in what is being taught to their children via school boards.

Particularly in Halton. “Activists” (some of them manifestly “Catholic haters”) are organizing to seize control of the Catholic school board to pursue a social agenda that excludes Catholic family values. Parents who disagree are alleging findings that their efforts to push back are uncovering the makings of a widespread electoral fraud abetted by naïve trust or dereliction of duty by those whose role is implicitly and explicitly to safeguard the democratic process.

And they are starting to come forward with their complaints. It takes courage to defend what is theirs/ours, and not simply because it involves trying to hold our officials and elected representative true to their obligations.

Let’s begin with a basic primer on the democratic principles at stake. First, elections are guided by the laws of Canada (rights of citizenship). Second, they take into account the qualifiers added by the appropriate provincial legislation. Third, they are administered by the local municipal authority.

This would seem a logical flow, since at their base, local elections are founded on the concept of accountability to the ratepayers of the corporation affected – the property owner. In essence, if you are not a member of the corporation (a ratepayer) you have no right to vote in that jurisdiction (corporation). In Ontario, the Education Act distinguishes qualified ratepayer- electors – for the position of the local school boards as either Catholic or Public.

That authority and obligation to do that flows from the Constitution.

The municipal elections are administered under the authority of the Municipal Act; therefore, local town or city designated officials (Clerks) would seemingly be responsible for ensuring that only the correct/properly qualified candidates and electors participate. The Municipal Property Assessment Corporation (MPAC) registers ratepayers according to their school support every time property ownership (including tenancy) is registered at city hall.

Election Commissioners in the Clerks’ office rely on MPAC to determine eligibility for candidacy and for electors. They do not appear to accept responsibility to check for proof that the candidate or elector meets the criteria.

Candidates are merely warned that: “It is a punishable offence under the laws of Canada to misrepresent one’s identity or to knowingly provide false or misleading information” (emphasis added), and that “MPAC reserves the right to share information with law enforcement authorities where suspicious activity is detected or fraud is suspected”.

That seems like a loophole big enough to allow a tractor trailer to pass through.

All the Clerk requires is a signed affidavit by the candidate that he/she meets all the requirements upon registration. No clerk demands proof of citizenship or Catholicity (Baptismal certificate) at time of registration. It seems almost useless to remind people that an affidavit has the same force in law as an oath sworn before a judge in court. Who will check?

What safeguards are in place to prevent abuse of the process or to punish abusers?

Here is a list of entities (we will withhold the names of the responsible bureaucrat for now) who some of the above parents have been directed to call or write with their concerns: 1. The Ministry of Education, 2. The Ministry for Municipal Affairs, 3. The Town/City Clerk, 4. The Director of the Board of education.

Corriere Canadese has done the same, as part of its own research. Only the Ministry for Municipal Affairs and Housing responded, as at time of printing… to refer us to their communications department.

The parents made/are making a deliberate choice to send their children to Catholic schools. Their frustration stems in part from the knowledge that parents who prefer not to do so have a public system, with its own governance structure, to which they can send their own children.

The outcome of the upcoming HCDSB election is extremely important to the Catholic ratepayer/parents and their children. No one from the above authorities is assuming responsibility for a fair and free election by and for the people directly affected.

In the pic above, the HCDSB and the bishop Douglas Crosby (photo from HCDSB’s Twitter profile