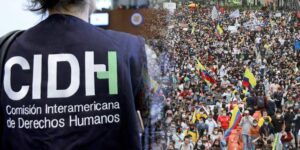 First there were fifteen. Now, there are more than 220 Canadian university professors who ask the Prime Minister of Canada, Justin Trudeau, to take a more active role in the face of the Colombian crisis.

On May 5, 2021, fifteen professors who teach different chairs at universities and institutions of higher learning in Canada, wrote to Foreign Minister Marc Garneau regarding the crisis in Colombia. Now, 228 academics from all over the country ask in a second letter not only Garneau but also different ministers, members of the Opposition and Trudeau that Ottawa “demonstrate its international leadership in favor of human rights in Colombia.”

“Canada must take concrete actions to urge the Colombian government to resolve the current crisis through dialogue,” the academics ask, adding that “since the start of the national strike on April 28, Colombia has been mired in a deep crisis of violence and state repression. The Colombian security forces have committed serious human rights violations against the protesters ”. 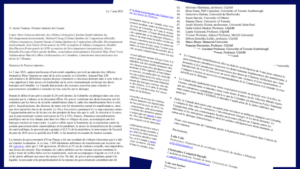 Letter sent by professors to the Canadian government

The professors consider that Canada should urge the Colombian government to respect human rights; allow the Inter-American Commission on Human Rights to carry out a transparent visit to the country in June with direct access to the victims and their organizations; commit to implement the Commission’s recommendations and resolve the current crisis through dialogue ”.

In addition, they ask that the Canadian government review any current or planned cooperation with the Colombian police or military and commit to not allowing the sale of weapons or light armored vehicles from Canadian companies.

A complicated scenario
So far, dozens of protesters have been killed and the murder of three members of the security forces is reported. The strike began five weeks ago against the government’s announcement to increase taxes on basic products such as coffee, chocolate and sugar. Since then, huge peaceful rallies have taken place daily in numerous cities and towns, accompanied by roadblocks across the country.

Among the reasons they list to explain the strikes and demonstrations are: “The frustration of the population in the face of the government’s handling of the pandemic, the attempt to dismantle the public health system, the poverty that affects 42.5 % of the population, the breach of the 2016 peace agreement with the FARC guerrillas and the incessant assassinations of social leaders”.

In a harsh report released this week, Human Rights Watch called on the Duque government for “urgent measures” to protect human rights. Until June 8, they denounced 1,649 arbitrary arrests of protesters by the police, 1,248 assaults, 45 homicides and 25 cases of sexual violence, all of them attributable to the security forces.

Both the United Nations High Commissioner for Human Rights and the Inter-American Commission on Human Rights have also expressed extreme concern regarding the legality, necessity and proportionality of the Colombian government’s response.

“As academics based in Canada, we are concerned about this situation. As we wrote in our first letter to Minister Garneau on May 5, “We believe that Canada has a responsibility to take concrete steps to end the violence of the Colombian security forces.”

Considering the particularly close relations that exist between Canada and Colombia, the signatories ask in their second letter, that “the Canadian government adopt a stronger position in favor of human rights.”

At the top of the article, a photo published by CIDH in its report on the Colombian crisis