Unmasked! Manipulation and Erosion to Kill the Brand 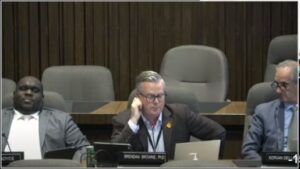 TORONTO – Thursday August 25. TCDSB Full board meeting – the last before the new school year begins on September 2. The first in, well since… forever, when the trustees and Staff present did not wear a mask (metaphorically and materially). Coincidently, the Agenda and Addendum (197 pages) focused on Reports [of achievements and issues]. Here are some impressions on “the great reveal”.

First, it is remarkable how some items, and the meeting itself, can be dispatched quickly and efficiently when trustee Rizzo is absent. Her incessant, obstructionist, counter-productive interruptions designed to prolong and wear down her colleagues, except the Secretary-Director who clearly relies on her to put his agenda into play.

Second, Secretary-Director Browne emerged as the behind-the-scenes [some might suggest, venal] manipulator architect of intra Board dissension and policy failures. Keep in mind the TCDSB has lost close to 9,000 students since he assumed his role. Moreover, the Board has been consumed with Court actions which by this Fall will probably land a multi-million-dollar cost on the Board and some of the trustees – all at the expense of students and teachers.

Browne did not/would not explain the $300, 000 payout to Law firm BLG in the interim. There was no indication of invoices to back up the outlay for [indispensable] services or the time frame in which they were provided. It must make the new senior legal counsel fidgety; she earns only about $170 thousand for the entire year, according to the Ontario Sunshine List.

It seems D. Browne’s grasp of physical evidence and financials is eclectic. Since January 2022, the Board of trustees has been paralyzed by vexatious, frivolous Trustee Code of Conduct complaints launched by De Domenico, Li Preti, Di Pasquale and Rizzo. With a simple majority of 6-5 (the defendant being always ineligible to vote) they hoped to condemn Di Giorgio and disqualify him from attending future meetings for an unspecified period of time. No such authority existed.

Until Thursday’s meeting, Browne had insisted that Board policy 175 had been amended in April of 2021 to allow that. Board senior Counsel, A. Ceddia, affirmed that such was not the case. After having misled the Board for eight months, squandered money and reputation, Browne did not have the decency to offer his resignation.

He could barely hide his disdainful smirks when trustee Del Grande insisted on recording the correctness of his points on the substance and procedures related to Trustee Code of Conduct documentation. Browne had just been outed for incorrectly insisting on a record that had been changed and posted. The difference had caused the last eight months of agonizing, vituperative character assassination type attacks on independent press and trustees. It led to the resignation in a snit by the complicit former Integrity Commissioner.

Coincidently, one of his ciphers, an openly anti-Catholic gadfly, who leeches off the system he deplores, tweeted a comment that the ‘induction’ of the student trustee was unaccompanied by a requirement to swear loyalty to the magisterium, thus affirming in his opinion that Catholic schools are nothing more than public schools.

So much for the Brand. Take the “C” out of the TCDSB and it is nothing more than a property development enterprise.

That must have been a Freudian misstep when Browne referenced the school construction taking place at Regina Mundi, of which he is so proud. There is not any.

The school’s campus, as that of the adjacent (former) high school was the subject of a scandalous waste of money and resources designed to piggy-back/partner on/with a condominium development at the former Villa Charities lands. It is now the site of Netflix production companies paying $15,000 per day for the use of Dante Alighieri Academy (DAA) and the former Convent of the Sisters of the Good Shepherd (acquired for $22 million in 2017 as part of the Condo scam). Plus $5, 000 per day for Regina Mundi. DAA students were redirected to Don Bosco in Etobicoke. Their numbers are down.

If the TCDSB under the direction of Brendan Browne does not believe in the brand, they should at least give us our money back and provide a real home for the parishioners who want to send their children to schools that still want the brand that has a “C” in their identifying title.

Brendan’s gadfly of preference whined on twitter that of the 10,000 employees at the TCDSB he was the ONLY ONE to attend a Board sponsored convention on Equity. Someone is lying about the relevance and resources Browne is dedicating to converting the TCDSB into a woke cult institution.

In the pics above, Brendan Browne during the meeting (screenshot from the video published on TCDSB’ website at https://www.tcdsb.org)