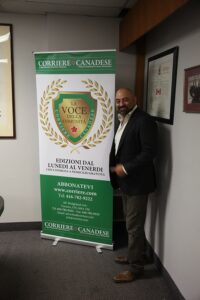 TORONTO – Traffic reduction, fight against crime, aid to counter the increase in the cost of living. These are the pillars of the program platform presented by Danny De Santis (in the pic above), candidate for the office of Mayor of Vaughan in the next elections on October 24th. De Santis’ program starts from the assumption of a progressive “disconnection between politicians and the people”, and the consequent need to mend this relationship that has deteriorated in recent years in the city administration.

“I see – says De Santis during an interview with the Corriere Canadese – a disconnect between people and politicians, I have been seeing it for a long time. And I said to myself: if I can be someone who rolls up their sleeves to help people, I think we can do a lot of good things. During the electoral campaign I am knocking on doors, I talk to the elderly, and I see that they cannot put food on the table. It’s a big deal, and I’m talking about the cost of living. I want to help. We have to help, I think we can make a change, I think we can help needs at such different levels, with the young, the elderly and I think it’s time to do something for the community.”

For the past twelve years the city of Vaughan has been administered by outgoing Mayor Maurizio Bevilacqua, who last summer announced his intention not to run for a fourth term. In the running for his replacement, in addition to De Santis, we find Steven Del Duca, Sandra Yeung Racco, Lino Mancinella, Paul Donofrio, Parveen Bola and Robert Gulassarian.

De Santis has clear ideas about the priorities in Vaughan. “There are many priorities – he admits – We can start with traffic. By now we have reached a point that we cannot move from one part of the city to another with any ease. We need more roads, more bridges. In the past we didn’t do it, the elected people didn’t. Let’s take a look at the world’s big cities: infrastructure is key, the subway is key. Crime right now in Vaughan is out of control, it is at its highest level. It is our responsibility to protect the elderly at all times, at all costs. I see violence, car theft. We need to make sure that criminals know that we no longer tolerate this situation; I will not. I look at violence and I look at my parents: we cannot allow someone to take advantage of the vulnerable. So, crime is right at the top of the priorities to be addressed. We have to be very aggressive; we need more police patrols on the roads.”

Inevitably, the debate slips on two other problems to be solved in Vaughan, that of the transparency of the city administration and the principle of responsibility towards taxpayers.

“We are talking again about the disconnect between people and politicians because the political class has lost credibility. In fact, I am running for this very reason: politicians must be responsible for their actions and must be transparent. Right now, we have politicians who have been in office for the last 20, 30 years. We must have term limits; people should not be allowed to serve more than two terms. With the current system, innovation and new ideas are blocked. Voting is important to make the necessary change. At the same time, we need to be more fiscally responsible.”

To do this – according to De Santis – it is necessary to strongly support small businesses, a fundamental element of the productive fabric of Vaughan.

“Small businesses are the backbone of every city. The economy thrives with small businesses. We must reduce this bureaucracy and always help them. Take a look at what has happened with the pandemic over the past couple of years. My question is: was it right to shut down the small businesses and leave the big box stores (chains) open? I would never, ever close these activities. We can have adequate security, we can have adequate precautions, but the lockdown has done a disservice to investors. People don’t want to come and invest in GTA.”

While inflation is a problem that should be addressed primarily by the federal government, “it is also a challenge for the mayor and city administrations, which have tools in their hands to mitigate its effects on citizens and businesses.”

“We have to freeze taxes. How can we go out there and tell people that we want to raise their taxes knowing that inflation is at its highest? I want to see how we can give people a discount. Look at the water bill, they simply skyrocketed: when I knock on citizens’ doors, they bring the water bill and the amount of money they pay is incredible. We need to take a look at utilities and where we need to cut. And this pandemic has brought people to their knees, the City, even Canada on its knees. Are these decisions that could have been taken in recent years? Why were they not done? We must make this change immediately and, if the Council is against it, we must tell the people who vote for or against.”

We need the turning point, therefore: the key word, even in Vaughan, becomes “change”. “I want to change the way we look at politicians. Now the word “political” gives me bad feelings. I want to bring hope to people, I want them to know that someone is fighting for them”.