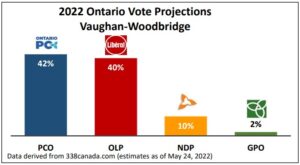 Just north of the Toronto city limits is the electoral district of Vaughan-Woodbridge. It is a district to watch, as electors may decide it is time for change. No matter the outcome, it is a rematch of 2018.

Created in 2015, the riding is relatively young. It is situated in the Regional Municipality of York and includes the southwest portion of the City of Vaughan and a substantial part of Woodbridge. It also has the highest concentration of Italian Canadians in all of Ontario’s 124 electoral districts. 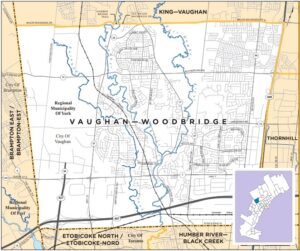 Statistics Canada says that 56,020 residents self-identify as Italian. That represents 53% of the district’s population. 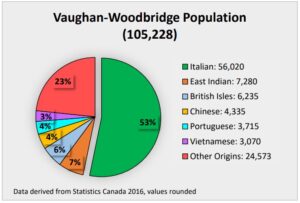 Michael Tibollo, the incumbent, seeks to hold the riding for the PC. He was first elected to office in 2018 when he won with 50% support of the electorate (21,687 votes). He beat then Cabinet Minister Steven Del Duca (the Liberal incumbent for Vaughan) by 7,945 votes. That year, the Liberals took 32% of the vote, followed by the NDP at 14%.

This time around, Del Duca (now the leader of the Ontario Liberal Party), appears to be fighting back hard. When contacted, he told the Corriere: “I have always fought for the people of my home community of Vaughan-Woodbridge”. He was the MPP for Vaughan between 2012 and 2018. “I was proud to deliver the funding for the Cortellucci Vaughan Hospital, the Highway 427 expansion, Hospice Vaughan and six new schools”.

Del Duca expressed his intention to build on the progress he has already delivered for the community. He pointed to his Party’s plan aimed at making life more affordable for Ontarians. These include measures like the 19-point Affordability Pledge to help lower the cost of gas, implementing $1 fares for transit and cutting the HST from prepared foods under $20.

Meanwhile, the PC have touted their plans that include investing in infrastructure, building highways, increasing investments to get more workers into jobs in the skilled trades and lowering gas taxes. When asked how he intends to address the affordability crisis and other key challenges that voters face in his constituency, Tibollo did not respond to our request for input as at time of going to print.

Another name on this year’s ballot is candidate Will McCarty. He aims to build support for the NDP. He too did not respond to our request for comment. According to the most recent projections by 338Canada.com (May 24), the PC are in the lead at 42%. The prediction model uses algorithms and takes all major polls into account. It shows the Liberals at 40% , trailing by two-points, followed by the NDP at 10%. (See the graph at the top of the article).