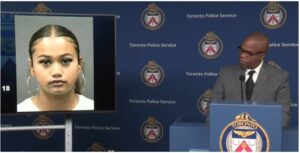 TORONTO – Two suspects arrested while the hunt for two others continues. Today during a press conference at its headquarters the Toronto Police updated the residents of the city on the ongoing investigation into the growing wave of violent car thefts. Sometimes, drivers are even thrown out of their car. “One can only imagine the trauma of people whose vehicles are stolen by violent individuals waiting for them in parking lots, at traffic lights, even in the driveway of their home, who ambush them – said Inspector Rich Harris – with their actions they cause a heavy psychological impact on the victims”.

Toronto has seen a soaring rise in car thefts this year. As of September 26, 6,497 thefts were reported to the city police. When compared with the whole of 2021, which recorded 4,498 reports, this is an increase of almost 45% with three months of the year remaining.

Car thefts under the threat of a weapon, which are counted separately and investigated by another law enforcement team, increased by 209%, from 58 to 182.

The latest arrests involve a series of car thefts that took place in August and September. “Even today, 56 vehicles have been recovered that have been stolen. Many of these investigations are ongoing and we are working with police services in each jurisdiction to resolve these crimes in a timely manner,” said Inspector Rich Harris of the Hold Up Squad.

Valerie Torres-Lizcano, 18, of Toronto, was arrested in connection with numerous car thefts in Scarborough and faces 14 counts, including gun robbery.

Meanwhile, police have issued an arrest warrant for Jasmine Oung, 18, from the York Region. Oung is wanted for robbery with a weapon.
Harris also identified another suspect who was arrested in connection with a violent car burglary in Etobicoke last summer.

Hamzah Hussein, 18, of Toronto, was apprehended on September 30 for the theft of a woman’s car in a parking lot near Albion Road and Islington Avenue. The victim was approached by two young men as she made her way to her parked vehicle: the two – one of whom has not yet been identified – pointed a gun at her head and asked for the keys. Hussein will face 12 counts including theft with a firearm, possession of a firearm with ammunition and possession of drugs for the purpose of trafficking.

But the problem is not limited to Toronto.

Data collected by CBC News shows that until August 31, car thefts in the nearby Peel Region increased by 54% compared to the same period last year. In Ottawa, thefts have already risen nearly 27% this year compared to last year, while Montreal is on track to surpass the 2021 number of thefts.