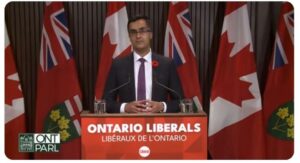 TORONTO – In yesterday’s article, we wrote that during the month of September in Ontario the average waiting times for patients who arrive in the emergency room and need to be hospitalized reached 21.3 hours (data from Health Quality Ontario – HQO). If it seemed like a lot to you, when you read it, hold on tight: according to a report from Health Canada obtained by the liberal provincial parliamentarian Adil Shamji and released today, once patients are hospitalized, 90% of them have to wait another 45 hours to complete the visit.

This is 40.5% more time compared to the same month (September is the one considered) last year. “And it’s the worst September ever since 2008” adds Shamji, sounding a dramatic alarm: “Healthcare is continuing its plummet. Now it’s in free fall”.

Going into detail, the report released by Shamji – who is also an emergency doctor – highlights that in September, in Ontario hospitals, patients arriving by ambulance waited up to 90 minutes to be dumped into a bed (+ 50% in the same month compared to last year); then, 90% of the same patients remained in the emergency room for 12 hours (+ 17% compared to the same month last year: the HQO report we published yesterday speaks of average waits of 21.3 hours for patients who, then, are hospitalized); finally, once hospitalization took place, 90% of those patients had to wait 45 hours to complete the visit (+40.5% compared to September 2021). The last straw is that – again according to the same report – the overall volume of patients who come to the rescue is down compared to last year: longer waiting times for a smaller number of patients, a clear sign of a collapsing system.

According to Dr. Shamji, the main problem is the lack of staff, between vacancy rates of nurses reaching 55% and a lack of ambulances to answer calls from the emergency health services. “The Ford government – adds the doctor-parliamentarian – insists on having everything under control while things are increasingly beyond its reach”.

But, as we also wrote in yesterday’s article, the situation is no different in other provinces. On the contrary. In recent days, an 11-year-old boy who had attempted suicide by ingesting drugs had to wait 41 hours in a waiting room at Langley Memorial Hospital in British Columbia, waiting to be transferred by ambulance to Surrey Memorial Hospital to be examined by a teen psychiatrist who was not available in Langley.

“It was absolutely heartbreaking,” his Mom said. “He received no treatment, no advice, nothing. He was just sitting in a chair. This 11-year-old boy, in the midst of a mental health crisis, found himself in an absurd situation, with us constantly asking, the staff of the hospital, ‘who can we call? What can we do?’ and they replied ‘Nothing, there’s nothing we can do’. Hallucinating “.

Situations like this are no exception in B.C. where – as stated by the president of the Union of Paramedics, Troy Clifford, to CTV – the people are left waiting in a priority queue constantly remaining at risk of being left behind due to any emergency. “These delays happen every day and this is due to insufficient staffing” says Clifford.

According to the Union, in fact, there are still many nights in which between 20% and 50% of ambulances remain empty in various communities, both urban and rural, due to a lack of personnel.

And to go back to the 11-year-old’s case, “in those days,” Clifford said, “about 40 percent of the Fraser Health Region’s ambulances were out of order, while the 11-year-old’s family was repeatedly promised an ambulance to moving him to another hospital would come soon”. Wait and hope…

In the pic above, Dr Adil Shamji, Liberal Provincial MP and Emergency Doctor in Ontario (photo-screenshot from his Twitter profile – @ShamjiAdil)