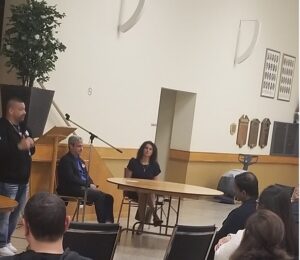 TORONTO – It was structured as a “Meet and Greet the Candidates” in the Community Hall of the Church of the Transfiguration.

It ended as a disruptive debate between some of trustee De Domenico’s “plants” and people who seemed genuinely interested in the direction of Catholic education. They had come to hear what the alternative to De Domenico, Gabriella Mazarakis, had to offer.

She made the attendance worthwhile. Dressed professionally, poised, calm, collected and above all prepared to address topics and questions reflecting research and deliberation. Unlike the argumentative De Domenico ‘s “I know everything style”, Mazerakis stayed on topic.

She had clearly come prepared. If I had been a catholic elector in Ward, the choice between the two candidates would have been a “slam dunk” on her behalf. Her answers were concise and informative; his, rambling and defensive.

On “sensitive social issues”, he claimed that trustees are compelled to follow Ministerial directives (untrue).

He repeated inaccurate numbers for student enrollment (90,000 when he knows the real numbers are closer to 84,000: the difference translates into 90 million dollars yearly).

He raised the issue of children with disabilities and the stress they pose on families yet offered no solutions and responded with anger when the audience took his bait. He’s been there for four years.

Mazarakis explored the rights of parents, made germane suggestions on how to administer allocation of funds for student needs, and proposed realistic methods of the engagement of families and parish in collaborative approaches to academic and social challenges. I have seen many candidates and debates in forty years of public life – she was impressive.

There were four trustee candidates in total. In some respects, the other two candidates from ward 1, Robert Pella and ward 3, Greg Rodriguez, were at a disadvantage. These were not their electors; consequently, the attention shifted from them almost immediately after their opening statements. In contrast to De Domenico, they were convincingly unapologetic about their commitment to Catholic education.

From my perspective, Mazarakis was the star candidate, no comparisons, among the group, especially regarding De Domenico. Others expressed the same reactions. Her team needs to get out the vote.

In the pics: Gabriella Mazarakis, the candidates Robert Pella and Greg Rodriguez with her and the people at the debate (photos Corriere Canadese)