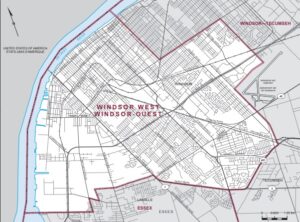 At the southwestern tip of Ontario is the electoral district of Windsor West. The constituency is situated along part of the international boundary between Canada and the US and includes part of the city of Windsor.

The area serves a vibrant population of 122,985 constituents comprised of different cultural and ethnic groups. For example, Italians, at 9% of the population, make up one of the largest groups originating from Europe. 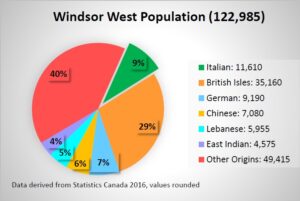 For the eighth time, Brian Masse, current MP, will try to win the seat for the NDP in the House of Commons. He has represented the riding since 2002 when he secured a win over the Liberals with 42% of the vote.

Prior to that, the district was in the hands of the Liberal Party. Between the years 1962-2002, Herb Gray represented the riding, making him one of the longest serving members in Canadian history.

In 2019, Masse was re-elected with 40% of the vote. His opponent, Sandra Pupatello took 36% of the vote for the Liberals, followed by 19% for the Conservatives. This is the second time that Masse and Pupatello will face off in a general election. 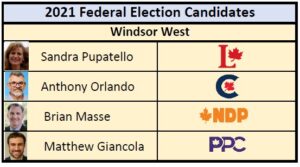 Candidate Anthony Orlando aims to garner more support for the Conservatives. When contacted, Orlando indicated his desire to work for the constituents to improve local job creation and expansion for major industries like Manufacturing, Auto, Border/Trade including Gaming and Tourism, with strong focus on Skilled Trades.

Orlando acknowledged the uniqueness of the region saying: “it has a willing, ready and able skilled workforce, all the resources for success and we are positioned on the premier transportation hub of North America”. His focus is to advocate for more federal resources in the region for a prosperous economic recovery.

According to the latest projections by 338Canada.com (September 8), which uses algorithms that take into account results of all major polls, the NDP, at 40%, are ahead of the Liberals by 6 points. The Conservatives, at 20%, trail the Liberals by 14 points. 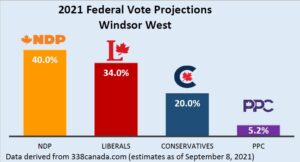 Candidates of the other major parties were unavailable for comment prior to our going to print.