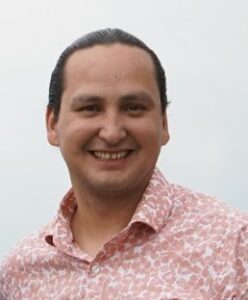 Toronto, June 25: The Cowessess First Nation announced a preliminary finding yesterday of 751 unmarked graves at a cemetery near the former Marieval Indian Residential School. This school was operated from 1899 to 1997 in the area where Cowessess is now located, about 140 kilometres east of Regina. Children from First Nations in southeast Saskatchewan and southwestern Manitoba were sent to the school. But, the First Nation took over the school’s cemetery from the Catholic Church in the 1970s. END_OF_DOCUMENT_TOKEN_TO_BE_REPLACED 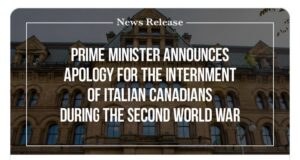 OTTAWA – The Prime Minister, Justin Trudeau, today announced that on May 27, 2021, he will deliver a formal apology in the House of Commons for the internment of Italian Canadians during the Second World War.

END_OF_DOCUMENT_TOKEN_TO_BE_REPLACED

Toronto, April 1: Today Premier Doug Ford has announced a 28-day province-wide shutdown in Ontario amid third wave beginning 12:01 AM Saturday, April 3 to curb the alarming spread of COVID-19 and in particular of hospitalization to the variants concern. END_OF_DOCUMENT_TOKEN_TO_BE_REPLACED 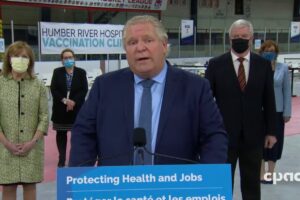 TORONTO – The Ontario government is implementing a province-wide emergency brake amid surging COVID-19 case numbers and record hospitalizations, Premier Doug Ford announced today, at the end of a week characterized by controversy, and accusations and for the alleged immobility of the federal executive in the face of the sudden surge in Covid-19 cases throughout the province. END_OF_DOCUMENT_TOKEN_TO_BE_REPLACED