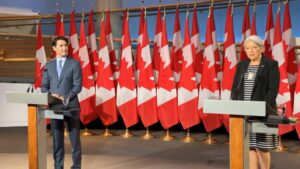 For the first time in the history of Canada, an indigenous person is called to fill the role of governor general: she is Mary Simon, Inuk leader and former diplomat. Her appointment, announced today by Prime Minister Justin Trudeau at the Canadian Museum of History in Gatineau, Quebec, was approved by Queen Elizabeth (the office of governor general is in a representative function of Her Her Majesty Queen Elizabeth II in Canada). END_OF_DOCUMENT_TOKEN_TO_BE_REPLACED

#WeAnswerTheCall is this year’s theme

At a time when Ontario is accelerating the mass vaccination process of the population, as a weapon to combat Covid-19, in a particularly difficult social and economic context, the role of health professionals in this fight is not forgotten. END_OF_DOCUMENT_TOKEN_TO_BE_REPLACED

Canada, in search of a more influential role in the international sphere

This week, Canada joined the request of the United Nations (UN) to give a joint global response to the imminent international economic crisis caused by the Covid-19 pandemic and asked the World Health Organization (WHO ) for greater transparency after the report he presented about the origin of the Covid. END_OF_DOCUMENT_TOKEN_TO_BE_REPLACED

How many times do we find ourselves focused on other people’s roles, jobs, responsibilities and behaviour? END_OF_DOCUMENT_TOKEN_TO_BE_REPLACED