TORONTO – Last July in Alberta practically all anti-Covid restrictions were eliminated. Prime Minister Jason Kenney, in fact, had implemented his “Open for Summer Plan”, a three-phase plan to reopen the economy that came into force at the beginning of June with which the former minister of the Harper government takes a different path from that of the other premiers. While in the rest of the provinces the line of a prudent reopening had been chosen, following the suggestions of the various technical scientific committees, in Alberta Kenney had opted for the “everything and immediately” approach.  END_OF_DOCUMENT_TOKEN_TO_BE_REPLACED

RSF projects 37 heads of state as predators of press freedom

Toronto, July 6: The international press advocacy organization, Reporters Without Borders (RSF) is planning to publish a gallery of grim portraits of 37 heads of state or government who crack down massively on press freedom. Some of these “predators of press freedom” have been operating for more than two decades while others have just joined the blacklist, which for the first time includes two women and a European predator. END_OF_DOCUMENT_TOKEN_TO_BE_REPLACED

TORONTO – As the Covid-19 pandemic continues to sweep across the globe, the constant barrage of case numbers, variants, total Covid-related deaths and now vaccination rates are impossible to ignore. END_OF_DOCUMENT_TOKEN_TO_BE_REPLACED 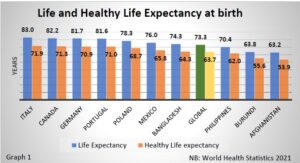 As the Covid-19 pandemic continues to sweep across the globe, the constant barrage of case numbers, variants, total Covid-related deaths and now vaccination rates are impossible to ignore. Data coming from the World Health Organization (WHO) warns the true number of Covid-related deaths is likely 2-3 higher than the official count of 3.5 million.