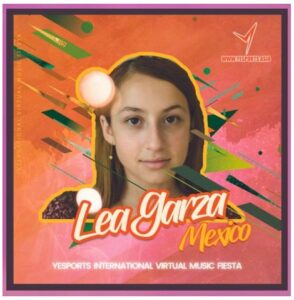 She has music in her blood, and you can hear it: try listening to the duet of “Vivo per lei” with the great Mexican singer/composer Juan Pablo Manzanero, son of the unforgettable Armando.

Lea Garza (in the pic above), 12, is a promise of pop music and it is no coincidence that this year she had the opportunity to participate in the “Sanremojunior World Final” in Italy as the only representative for Mexico, the country in which she has lived since the age of 9 (she was born in Miami) with her mother Giulia Nenci, from Tuscany, and her father Javier Garza, from Mexico.

Lea has music in her blood, because she is a grandson and daughter of art: her grandfather, Xavier Garza, was a member of Mexican rock bands of the 70s such as Los Locos Del Ritmo and Mr. Loco with whom he won, in 1975, the “Yamaha Contest”; her father, Javier Garza (in the pic below, with Lea), is an internationally renowned sound engineer (he has worked with Shakira, Ricky Martin, Eros Ramazzotti, Madonna, Phil Collins, Alessia Cara, Gloria Estefan, Jennifer López …) and has won 16 “Grammys” Latin and American; her mother, Giulia Nenci, is a psychobiomusic therapist, a therapy that uses the different frequencies of sound as an essential tool in the process of a cure for psychophysical well-being. 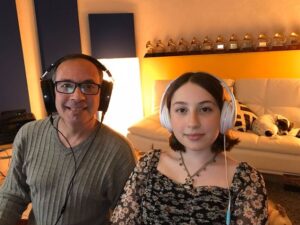 Inevitable that also Lea followed the path of music: at 5 she took her first singing and piano lessons and, as soon as she turned 12, she participated in a singing competition organized in Mexico from Tijuana, coming first – out of fifty participants from all over Mexico – with a video-cover of “Stone Cold” by Demi Lovato (watch the video below). Among the judges of the competition, there were also the singer David Cavazos and the teacher Lula Ross, vocal coach of a well-known Mexican television program, “La Academia”. The video ended up on YouTube and Lea was noticed by many talent-scouts and the visibility allowed her to start a series of collaborations like the one with Juan Pablo Manzanero in “Vivo per lei” – which is now in rotation on Spotify, listen here: “Vivo per lei” – and the one with the Italians Jalisse, winners of the 1997 Sanremo Festival, with whom he is working on his first album, together with other artists, Mexicans and more.

Meanwhile, she sings in three languages ​​(she is also studying French) and is competing in another competition, “Yesports”, organized in China: Lea is the only Mexican representative (it is possible to vote for her online, here: yesportstalents – on ​​April 9th ​​they will be proclaimed the winners).

Her dream? Becoming like Alessia Cara. “Two years ago – says Lea – I sent a video to Alessia to tell her that she is my model as a singer and she replied inviting me to work hard for my dream because having one is wonderful”. A detail: Lea’s grandmother’s surname is Caracciolo, like Alessia. What if they were distantly related? Good blood does not lie …