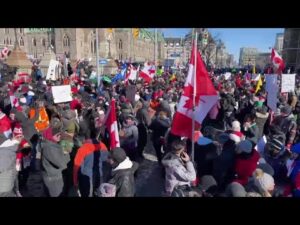 OTTAWA – As Ottawa prepares for the arrival of the Veterans for Freedom tomorrow, Canada Day, according to information obtained by Radio-Canada and CBC, one of the judges who presided over the court hearings of the organizers of the Freedom Convoy received serious threats to the point of requiring police intervention.

The identity of the judge in question has not been revealed for security reasons. What is certain is that his life, says the judge, has changed. “I thought, should I tell my kids not to go home for a while? – he said – I changed the alarm system in the house. I was also advised not to go the same way every day. The bottom line is that you feel vulnerable in your own home, in your own home.”

In addition to an attack on the person, intimidation is an attack on institutions. The judge believes that most Canadians respect the justice system but at the same time a minority is trying to weaken it. “It’s intimidation. You are trying to influence a court decision, and that’s a serious thing,” he said.

Canada’s Supreme Court President Richard Wagner expressed similar concerns in a recent speech in Montreal. Covid-19 has caused a sharp increase in the circulation of incorrect information that can have negative effects. “The pandemic has forced many people to live, so to speak, online during the lockdown. And it is at times like these that lies and conspiracies spread like wildfire, as we have seen around the world, disinformation poses a real threat to democratic institutions.”

According to the President of the Supreme Court, the demonstrations that took place in Ottawa this winter stemmed in part from disinformation.

Meanwhile, Ontario’s Attorney General’s Office declined to say whether other judges had received warnings from freedom convoy supporters. “It would be inappropriate for the ministry to comment on an ongoing or potential police investigation,” reads an email sent to Radio-Canada by ministry spokesman Brian Gray, “the ministry takes the safety of the court and that of all those in our courts very seriously, the local police and the Ontario provincial police are committed to ensuring the highest level of protection.”

And protecting the citizens of Ottawa, during the demonstrations organized by the Veterans for Freedom, is the priority for law enforcement. The memory of what happened in the city during the three weeks of the Freedom Convoy’s stay is still alive in the mind. The police are preparing to make sure that the upcoming demonstrations do not turn into another occupation of the city center. Steve Bell, Ottawa’s interim police chief, said Monday that his officers can count on the support of the Mounties and Ontario Provincial Police and that he also plans to have riot squads and tow trucks at his disposal.

Contacted by the CBC, the office of Public Security Minister Marco Mendicino said that “the government will give the police the necessary tools and support to ensure that people can celebrate Canada Day.” A Canada Day, which certainly, will be different from all the past ones.