Ontario tries to turn the page on vaccines 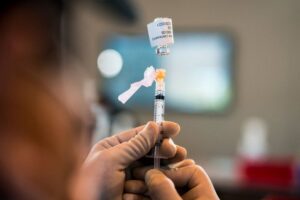 TORONTO – Ontario is trying to accelerate on the vaccine front. After the controversies of the last two weeks, due to delays and setbacks in the provincial immunization campaign, the provincial government intends to change gears to get to vaccinate as many people as possible with the three vaccines currently available, Pfizer, Moderna and AstraZeneca.

Yesterday, according to covid19tracker.cadata, 136,695 doses were administered throughout the province, a step up from 95 thousand on Tuesday but still insufficient according to the government’s own roadmap.

Also because the logistics-organizational machine activated by the Ford executive, for now, is not able to travel at full capacity. According to covid19tracker.ca, the federal government has so far delivered a total of 5,242,495 doses of vaccine to Ontario health authorities, of which 4,131,882 have been inoculated, or 78 percent of the total.

As a result, more than 1.1 million doses remain unused and if yesterday’s vaccination rate is respected, it will take another 8-9 days to dispose of stocks. In the meantime, many more doses will arrive; about half a million of Pfizer, while after the delays of the last few weeks Moderna should respect the scheduled delivery times.

At the provincial level, at least as far as the immunization campaign is concerned, the situation is better in other jurisdictions in Canada.

In Saskatchewan, almost 90 percent of the doses delivered were used, while in Quebec – with Ontario the Canadian province most affected by Covid in a number of cases and deaths – out of 3,066,969 doses delivered by Ottawa, 2,503,910 were used, or 82 percent.

Helping the provincial government’s vaccination campaign was the decision, announced last Saturday, to make the AstraZeneca vaccine available to the 40m to 54-year-olds. Previously, the vaccine produced by the Anglo-Swedish consortium was only given to citizens aged 55 to 64. As of yesterday, vaccination with AstraZeneca is also guaranteed in many pharmacies in the province at any time of the day, seven days a week.

In order to have access to this service, you need phone reservations and on pharmacy websites.