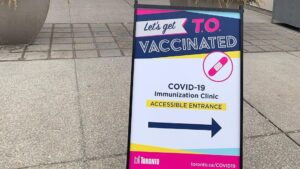 TORONTO – Ontario’s government is pushing the accelerator. Starting tomorrow, it will offer appointments for the administration of the second dose to people aged 70 and over. Under the original plan, the group over 70 was not to have access to book until June 14, and those who received the first dose before April 18 could not be able to rebook until June 28.

People who have received a first dose of the AstraZeneca vaccine and wish to receive a second dose of AstraZeneca or an mRNA vaccine can now make an appointment for the second dose also at a pharmacy.

At 8 am tomorrow morning (Monday, June, 7)  the provincial portal – covid-19.ontario.ca/book-vaccine/ – will begin to accept vaccination appointments at a mass immunization clinic.

The move comes after Ontario Health Minister Christine Elliot said the province was looking for ways to expand second-dose appointments to more groups. Those over 80 can book a second dose on May 28.

The province has not provided an updated program on when other eligible groups will have access to rebooking but said in a statement that it “will continue to accelerate second doses for all Ontario residents taking into account when they received the first injection, as well as the availability of vaccines.”

Last Wednesday, after confirming that hundreds of available appointments had not been booked, the York Region expanded eligibility for all over-70s. The province said individual public health units could continue to expand eligibility even before the provincial timeline.

The province’s government is speeding up the timing of its vaccination plan as large stocks of vaccine are on the way: Ontario will receive about 940,000 doses of Pfizer per week during June, dropping to about 885,000 doses a week in July. Federal officials said Friday that Canada will continue to receive more than two million doses of Pfizer vaccine per week through the end of August.

While health officials have said that those most at risk should receive second doses first, there is also a feeling that with the arrival of large stocks, times are set to shorten.

Yesterday, the mayor of Mississauga, Bonnie Crombie, called on the province to allocate a larger share of vaccines to hotspots where most cases are concentrated.

Health Minister Christine Elliot, while not committing to sending a larger quota to hotspots, said that given the current oversupply, all regions will continue to receive a large supply of vaccines. The latest provincial data show that while 70% of those aged 18 and over received at least one dose of vaccine, only 7.4% of the population received the second administration. Among those over 80, almost 29% have been fully vaccinated.

So far – out of a provincial population of about 14.7 million – just under 900,000 people have been fully immunized with a double dose.