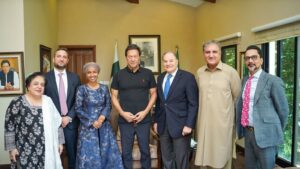 Surprisingly the U.S. Minnesota Democratic Representative Ilhan Omar flew to Pakistan to meet the ousted Prime Minister Imran Khan on Wednesday April 20 at his home in the Bani Gala in Islamabad to discuss Islamophobia after he was ousted by a vote of no confidence.

This transpired before even she met with current members of Pakistan’s parliament, the nation’s President Arif Alvi and Prime Minister Shehbaz Sharif.

While Khan has accused the U.S. before and after for his ousting due to visiting the Russian President Vladimir Putin the day before he invaded Ukraine. Khan was the first prime minister to be removed by no-confidence vote on April 10.

However, Ilhan Omar was quoted as saying ‘she appreciated the role played by Pakistan against Islamophobia, particularly towards the adoption of UN resolution in this regard.’ In contrast, Khan also highlighted the role of Pakistan in peace-keeping efforts in the region amid the war on terror.