Imran Khan should reveal about his conspirators fully 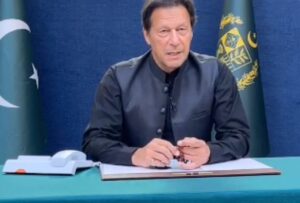 On Sunday Pakistan’s Prime Minister Imran Khan (in the pic above, from his Twitter profile) has indicated about toppling his government. Apparently that threat came after meeting the Russian President Vladimir Putin at the eve of waging war on Ukraine and he defied a written call for support from the western allies.

Surprisingly as the house was prorogued by President Arif Alvi for a fresh election for which a number of his party leaders felicitated him.

Khan revealed to the felicitators that the US had sent a threatening message through Pakistan’s envoy. He was quoted as saying that US Assistant Secretary of State for South and Central Asian Affairs Donald Lu had reportedly in a meeting with Ambassador Asad Majeed warned there could be implications if he survived the opposition’s no-confidence motion in the National Assembly. Moreover, “in the last few days” his party dissidents had frequented the [US] embassy.

However, that simple indication is not sufficient enough for his nation or to the world, as there was an assassination plot against him already taken into consideration by the National Security Council.