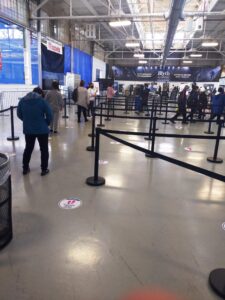 TORONTO – The race for the second dose of vaccine in Ontario is starting again. As of today, after the significant openings last week, the standards were changed to be able to make the reservation: the goal is to be able to progressively increase the number of people completely immunized, also in light of the threat posed by the Delta variant. From 8 a.m., all Ontario residents who received the first dose of the vaccine on May 9 and before that date can actually book the appointment to get the second one.

Until yesterday, only adults residing in the hotspots of the province, those areas of Ontario where the Covid-19 contagion runs faster, could do so. But that’s not the only news this week. Starting Wednesday, there will also be changes for those who live in hotspots: in this case, the reservation can be made with reference to the first dose received on May 30 and before. In particular, the measure concerns residents of Toronto, Peel Region, Halton, York, Durham, Hamilton, Porcupine, Waterloo, Wellington-Dufferin and Simcoe-Muskoka.

And it is precisely on these two vaccines that the debate in Ontario continues. Due to a confirmed delay at the weekend in deliveries of the Pfizer vaccine, this week – and perhaps also next week, but there is no official confirmation – those who received the vaccine resulting from the German-American consortium will almost certainly have the second dose of Moderna.

According to the health authorities, the two vaccines are essentially interchangeable: they are based on the same principle of activation of immune defences against Covid-19. At the beginning of June, NACI – the Canadian regulator that evaluates vaccination efficacy – published recommendations regarding the second dose: it is preferable to receive the recall injection with the same vaccine, but where there is no availability you can go ahead with a vaccine of the same family, the one that uses the mRNA principle.

It remains to be seen now whether citizens will follow the instructions of the health authorities or whether there will be, as is conceivable, a possible skepticism followed by the cancellation of reservations.

Meanwhile, however, the federal government has confirmed that there should be no further setbacks in the coming weeks despite the delays of the last few days.

Ottawa’s roadmap for the national immunization campaign against Covid-19 should be respected. This week – confirmed the executive – a maximum of 5.2 million doses will be delivered to Canada: 2.4 million will come from Pfizer and another 2.8 million from Moderna.

According to the federal government’s style, by the end of July more than 66 million doses of the four vaccines approved by Health Canada – Pfizer, Moderna, AstraZeneca and Johnson and Johnson – will have arrived in our country enough to immunize all Canadians aged 12 and over.