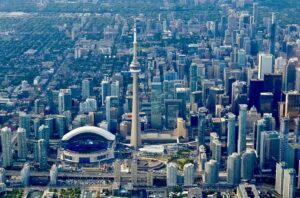 Toronto’s tourism industry will get a boost of $16.3 million from the provincial government. Ontario’s Minister of Heritage, Sport, Tourism and Culture Industries, Lisa MacLeod, made the announcement today in the heart of the city. The funds are designed to aid in the sector’s pandemic recovery efforts.

A portion of the funds, $9 million, will be directed towards Destination Toronto to help with workforce development, drive demand in the region and encourage the creation of new tourism products and activities.

The Metro Toronto Convention Centre (MTCC), will receive the balance of $7.3 million in stabilization funding to help support continued operations and maintenance of the facility. According to Lorenz Hassenstein, President and CEO of the MTCC, the centre generates roughly $500 million to the economy on an annual basis. That is about 1.4% of the total for Ontario.

Typically, the centre employs 2,000 staff. Pandemic restrictions and the suspension/cancellation of events mean nearly 90% – 1,800 – of the staff members are still on leave.

Toronto is known as one of the leading tourism destinations in Canada. The city welcomes nearly 27.5 million people visitors each year. It also boasts some of the best convention and sports facilities in the country. However, it has also suffered some of the greatest losses with respect to other destination sites in the tourism sector.

In previous analysis by Destination Toronto, data suggests the drop in the city’s tourism industry during the pandemic amounts to $8.35 billion in losses. That is a significant loss in an industry which usually generates $36 billion in economic activity across the province.

Today’s announcement comes just days after the province announced $8 million towards Ottawa’s tourism industry. Both Toronto and Ottawa are gateway cities that attract millions of visitors looking to experience the rest of Ontario.

According to the province, the added investments are to help protect jobs, sustain operations and provide aid in the planning and recovery of a crucial sector in Ontario’s economy.

“This funding will enable the MTCC and Destination Toronto to adapt and respond to the new realities facing tourism businesses”, said Minister MacLeod in a statement following the announcement. Until the province enters Step 3 of its “Roadmap to Reopen”, indoor meetings, event spaces, sports and recreational facilities remain off limits.

End of operating room block, there is a shortage of blood