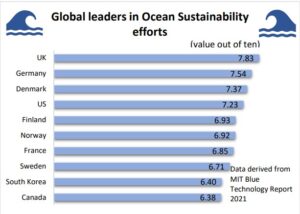 Oceans cover more than 70% of the Earth’s surface. We may be overlooking them as a source of renewable energy, whether thermal or mechanical. The oceans capture the sun’s heat while their currents, and waves generate mechanical power. Harnessing the power of this vast natural resource, while protecting its ecosystem and biodiversity were among the topics of discussion at the COP26 Summit.

The study ranked 66 “coastal” countries and territories (those bordering seas and oceans) in several areas including their progress and commitment towards sustainability by protecting the ocean environment through technology innovation and effective government policies.

Canada has the world’s longest coastline, measuring over 243,000 km. In the BTB Report rankings, it scored 6.38 out of 10; good for tenth place overall (see graph above). In Tuesday’s Speech from the throne, Prime Minister Justin Trudeau’s government recognized the need to go “further” and “faster” in taking real action to fight climate change. The Speech also stressed that “protecting our lands and oceans will address biodiversity loss”.

The authors of the BTB Report also highlight the need for a more coordinated approach to increase the health and resilience of the ocean to accompany more land-based efforts to reduce carbon emissions.

The top spot on the “Blue Technology Score Board” goes to the UK, with a score of 7.83. The country’s high ranking is due, in large part, to its “Blue Technology” ecosystems and its position in offshore renewable energy facilities, which include the largest offshore wind farm in the world.

Germany is a close second with a score of 7.54. The German government’s efforts in coastal marine conservation, both at home and abroad, have landed the nation among global leaders in “Blue Technology”. That is impressive for a country that is nearly land-locked, except for its northern shoreline along the Baltic and North seas.

Not surprisingly, four Nordic countries land in the top ten: Denmark at 7.37; Finland at 6.93; Norway at 6.92 and Sweden at 6.71. These countries rank third, fifth, sixth and eighth respectively. The authors of the BTB Report attributed this to the “collaborative solutions-minded governments and deep digital technology innovation ecosystems,” while also acknowledging the connection to their maritime economies.

Other countries that are making progress in commitments toward protecting ocean sustainability include Australia, ranked 15 out of 66, Italy ranked 21 and Portugal at 26.

Trudeau highlighted a sense of urgency in calling for a more aggressive “oceans sustainability”. This expansive natural resource, which captures and stores roughly one-third of global greenhouse gas emissions is under threat from pollution, acidification and climate change. Together, these directly affect biodiversity and the functioning of ecosystems.

Globally, more than three billion people rely on oceans for their livelihood. As such, oceans are a vital source of life for the entire planet. This further underscores the need for greater action towards innovative technology in support of ocean sustainability.