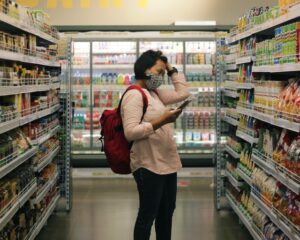 TORONTO – The annual inflation rate falls, but that’s not good news as food prices continue to rise. This is what emerges from the latest report on the consumer price index by Statistics Canada, which shows that inflation fell slightly, in September, to 6.9 per cent (from 7% in August), but it is solely due to the drop in the price of gas, which fell by 7.4% in September.

In confirmation, the chief economist of BMO (Bank of Montreal), Douglas Porter, said that the deceleration of inflation was less than expected. “In no uncertain terms, inflation has not declined as expected last month, even as gasoline costs have taken a big step back” Porter said.

Food prices, on the other hand, have risen at the fastest rate since August 1981, with prices up 11.4% from a year ago.

Statistics Canada points out that food prices have exceeded the general inflation rate for ten consecutive months and that their rapid increase is due to weather conditions, rising fertilizer and natural gas prices and the Russian invasion of Ukraine.

Wages also continue to rise, but they do so at a slower pace than prices. Also according to Statistics Canada, average wages increased by only 5.2% in September compared to a year ago.

However, everything increases: for homeowners or potential buyers, higher interest rates increase the cost of mortgage interest; with the arrival of September which marked the beginning of the academic year for many students, even university fees have reserved a “surprise” with an increase of 2.3% compared to a year ago.

On a monthly basis, the consumer price index overall increased by 0.1 percent.

The Bank of Canada will monitor the latest data on the inflation before the next announcement on interest rates, expected next Wednesday: the Canadian central bank, as already announced several times, is expected to increase the rate, with forecasts split between half (0.50) and three-quarters (0.75) of a percentage point.

The central bank, which has a mandate to keep a low and stable obstacle, has tried to keep the interest always stable, with high interest rates: this year it has already raised its key interest rate five times bringing it from 0.25 in January to the current 3.25 per cent.

Increases in interest rates translate into higher borrowing costs for Canadians and businesses, which slow spending in the economy.

The Bank of Canada aims to slow spending enough to bring the example back to its two percent target, although the full effect of these rate hikes will take time to make its way into the economy, as has become evident from the continuing increases of the prices recorded in recent months and from the inflation,  still high despite the “campaign” of the Bank of Canada.

Meanwhile, the effect of rising interest rates continues to be felt on the housing market, which cooled after house prices peaked in February. And, above all, it makes itself felt on families who have mortgages and variable rate loans: for them, it’s a bloodbath.

Photo by Viki Mohamad on Unsplash