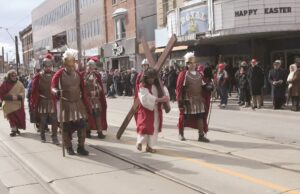 TORONTO – On Friday in College there will be no statues or banners or even prayers and songs. There will be no representation of the passion of Jesus Christ for the third year in a row. The last procession – the 57th – organized by the Church of St. Francis of Assisi dates back to 2019. Then the arrival of the Covid-19 pandemic swept away with a sponge this tradition that precedes Easter Sunday. And also this year, now that despite everything the Via Crucis could have winded through the streets of College, the decision of the church was to postpone to next year this representation so dear to the Italian Canadian community and beyond.

The reason, according to Father Francis Walter, is only one: the lack of time to organize it. This is what Father Walter told The Catholic Register – a weekly published by the Archdiocese of Toronto. “The planning of the procession must begin in the autumn – said the parish priest of St. Francis of Assisi Catholic Church – the restrictions decided by the government to stem Covid-19 have prevented this from happening”.

The parishioners, father Walter added, were aware from the beginning of the cancellation of the procession. No social media post or notice in the parish bulletin was needed to officially announce that it has been cancelled for this year.

In reality, the Via Crucis of College Street, in which thousands of people from outside the city have participated in the past decades, is not at all a religious event limited to the College district. Until the time of going to press we did not receive a comment from Father Walter about it.

In recent days, many people have called the Corriere to find out if this manifestation of faith would come back to life this year. No one, in essence, officially announced that, once again, the procession would not take place.

To say that the community of Italian origin has been hurt by us is an understatement. The disappointment was really great, the hope of the Italians of Toronto was to be able to attend the historic Via Crucis. On the other hand, the events that are organized in Toronto, this year will all be there to the delight of those who participate: last March 20 the Irish community did not even pass through the antechamber of the brain the idea of giving up the St. Patrick Parade. And preparations are underway for the upcoming Pride Months, the Toronto Jazz festival, the Laminate Festival or the Caribbean Carnival, just to name a few.

To be penalized therefore seems to be only the Italian community that had made a fixed appointment of the procession, an opportunity to represent the rite of the Catholic Church with which it reconstructs and commemorates the painful journey of Jesus Christ who is about to be crucified on Golgotha.

“The procession is historic, it was born in 1962 and has become over time a heritage of all of us – used to say Cav. Simonetta who had taken part in the birth of the procession and who was president, until its disappearance (in June last year, ed), of the Lay Committee of the church of San Francesco d’Assisi – it has become increasingly larger, with the participation of many people happy to follow the salient phases of the Via Crucis, step by step with prayers and songs that accompany the path of Jesus with the cross to Calvary”.

Meanwhile, Father Francis Walter, assigned to the parish of St. Francis of Assisi in 2019, told The Catholic Register that he looks forward to the opportunity to bring the tradition of Good Friday back to the streets of Toronto. The desire to start again in 2023 is there, but “everything depends on the state of the pandemic”, he said. Well, no one has the crystal ball to see the future and months, until next Easter must pass as many as 12: it would be good to wait a little longer to decide and in any case, still plan it. The community deserves that its traditions – religious ones occupy a special place in its heart – continue in the years to come.