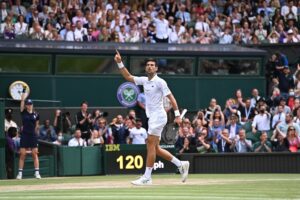 WIMBLEDON – Novak Djokovic beats Matteo Berrettini in the Wimbledon final and wins his sixth career title – the third in a row – on London grass. The Serbian, number 1 in the world, wins for 6-7 (4-7), 6-4, 6-4, 6-3 in 3h and 24 ‘. For Djokovic, this is the twentieth title in a Grand Slam tournament. For the 25-year-old Italian it is anyway a great result. First of all, because he was the first Italian, in 144 years, to play the final of the Wimbledon tournament. And then because Berrettini held up to the champion, playing an excellent match and being defeated with honor by the All England Club.