Is proof of Imran Khan echoed in American Fox TV? 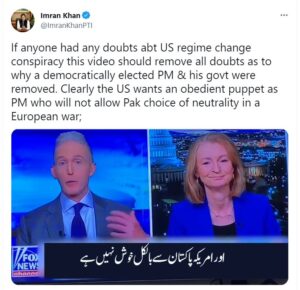 The ousted PM of Pakistan, Imran Khan wrote in a tweet message (in the pic above) on May 2 that, “US wants an obedient puppet as PM” while clearing the doubt about his ouster, the ‘regime change conspiracy’.

Actually Khan referred a video clip of the Fox TV Network of the United States attached to his tweet, where apparently a male anchor asked a panel lady by highlighting America’s real might, “What would you say to Pakistan?” She replied, “Pakistan needs to support Ukraine. Stop looking for deals with Russia right now, limit their involvement with China okay, and then also stop the anti-American policies that are a part of the reason Imran Khan, the Prime Minister got voted out of office couple weeks ago. So, it’s time to cool it on the anti-American pro-Russian policies in Pakistan. This is not the time.”