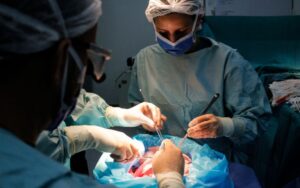 In a first-of-its-kind procedure, surgeons at the University of Alabama at Birmingham successfully performed the first transplantation of a genetically modified kidney from a pig to the body of a 57-year-old brain-dead man. The procedure took place on September 30 and the results of the study were published in the American Journal of Transplantation (January 20).

The team of doctors reported that within the first 23 minutes of attaching the genetically altered pig kidneys, they started filtering blood and producing urine until the study ended 77 hours later. Researchers monitored the kidney function during the three days post transplant and reported that the organs did not trigger rejection.

Typically, pig organs cannot be used as an option in human organ transplant surgeries because the body’s immune system rejects the animal organ, even with the use of immunosuppressive therapy. Researchers have worked towards manipulating the genetic makeup of pigs to develop organs more suitable for transplantation into humans.

That mission appears a little closer to reality in a different first-of-its-kind surgery which took place earlier this month. On January 7, surgeons in Maryland successfully transplanted a genetically modified pig heart into a 57-year-old man with terminal heart disease.

According to the University of Maryland School of Medicine, three days post transplant, the pig heart was doing well and was not automatically rejected by the patient’s body. He will be “carefully monitored over the next days and weeks to determine whether the transplant provides lifesaving benefits”, read the statement. Recent updates indicated the patient is convalescing and communicating with those around him.

In situations where a patient faces a life-threatening condition and has no other option, the Food and Drug Administration, which oversees experiments such as this, grants the surgery under “compassionate use” emergency authorization.

However, the use of genetically modified pig organ to human transplants presents daunting ethical questions. For one, there is the issue related to organ transplants between species and the associated risks like the transmission of infection. Other concerns include the treatment of animals and the ethics of altering the animal ‘s genetic code for the purpose of organ donation.

The fact remains that the demand for organs outpace supply. In the US, over 106,000 people are on the national wait list for a life-saving organ. In Canada, that number was close to 4,400 by the end of 2019.

While these breakthrough experiments seem hopeful, there are still countless unknowns. Questions such as how long is the life span of a gene-modified pig donor organ? Who qualifies and what is the quality of life for the recipient? And what mechanisms lead to failure?

Researchers agree that more work needs to be done. However, these studies and their outcomes have sparked conversation on ways to boost organ donation through other means. While the ground work may have been laid for future clinical trials, more research is required to ascertain the viability, efficacy and long-term outcomes of genetically modified pig organs in humans.