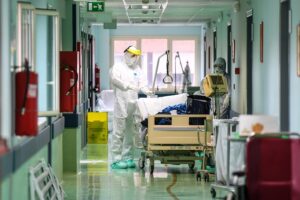 TORONTO – Over 1 million cases of Covid-19 and more than 11,000 deaths since the beginning of the pandemic: today Ontario crossed the two sad milestones, with another 37 deaths that bring the total to 11,004 and 4,790 new infections that increase the total count to 1,001,455.

3,861 people are currently hospitalized in Ontario with the virus – compared to 3,797 on Sunday – and 615 are being treated in intensive care, with an increase of 11 patients in the last 24 hours. The 4,790 new cases represent the tip of the iceberg, given the limitation of access to tests to the “at risk” categories only, but what matters is the positivity rate which, with the 20,716 swabs analyzed today, is 18.4 %.

The number of deaths in Quebec was also high today, with another 52 deaths in 24 hours, bringing the total, since the beginning of the pandemic, to 12,851. Another 16 people ended up in hospital, where the total number of patients is now 3,299. However, ICU admissions are down by 10, for a total of 263 people assisted. Of the new hospitalizations, eight are under the age of four (age group not eligible for vaccination).

As for the infections – however an underestimated figure – out of a total of 27,290 samples analyzed, 2,807 new cases were detected: now there are 47,083 in active and known cases in Quebec, where the total number of infections since the beginning of the pandemic is equal to 838,437.

Manitoba also recorded a slight decline in hospitalizations, since last weekend, compared to previous days, now there are 586 people in hospitals, of which 44 in intensive care. The growth of hospitalizations in Saskatchewan seems to slow down, despite the still high number of infections: the province has in fact broken the daily record of new infections for the fifth time in a month, with 1,629 new cases reported on Sunday (the previous record had been set January 22, with 1,483 new cases), but on the same day on Sunday no deaths were recorded and total hospitalizations are 252, an increase of 8 compared to Saturday. 24 patients in intensive care.