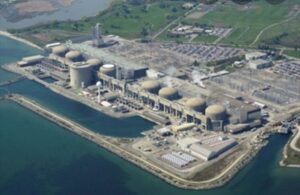 TORONTO – Ontario plans to extend the life of the major Pickering Nuclear Generating Station and is looking to see if it can keep the plant running for another 30 years in order to fill an expected energy shortage. Energy Minister Todd Smith said he had asked Ontario Power Generation (OPG) to keep the plant running beyond 2025.

“Earlier this year, at the request of the government, the OPG revised its operational plans and concluded that the plant could continue to safely generate low-cost, reliable and emission-free electricity,” Smith said. The plan requires the approval of the Canadian Nuclear Safety Commission.

The nuclear power plant, located on the northern shore of Lake Ontario, provided 14 percent of electricity production in the province last year.

Smith said OPG will complete a feasibility study — which will be completed later this year — exploring a long-term extension that would require a full renovation. The minister also pointed out that the demand for electricity is high and will only increase with the increased use of electric vehicles, electric arc furnaces in steel mills and investments in general and that without the extension of the activity of the Pickering plant it would help to fill a shortage of electricity.

Finding a valid solution to a problem that will undoubtedly arise in the coming years, is what the government has committed to do. “When we were exploring the opportunities on how to remedy this deficiency, we thought that we have a resource here who has a proven track record of providing safe and reliable electricity at affordable prices every day, and that therefore we could extend the operation of the plant – added Smith – in addition to keeping the plant operational will protect thousands of jobs”.

Ontario’s Independent Electricity System Operator has sought the supply of energy sources in order to cope with the increased demand for electricity.

Additional production in the medium term depends enormously on natural gas, and even as the government seeks to end its dependence, there are also some natural gas supporters on IESO’s list of qualified long-term supporters. Due to natural gas, greenhouse gas emissions from the electricity sector will increase for at least the next two decades and it is not until about 2038 that IESO expects net greenhouse gas reductions from electric vehicles to be able to offset emissions from the electricity sector.

Minister Smith asked IESO to inform him this autumn about exploring a moratorium on new gas generation and a plan to achieve zero emissions in the electricity sector.