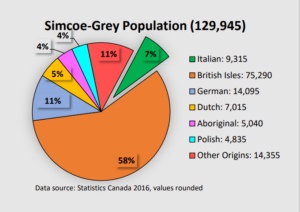 Travelling out of Northern Ontario, we head into the area of South-Central Ontario to focus on the electoral district of Simcoe-Grey. Situated along the southern tip of Georgian Bay, the district encompasses one of the region’s most popular destinations, Wasaga Beach, a two-hour drive 145 km north of Toronto. 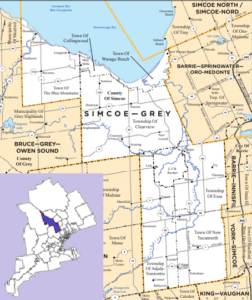 Simcoe Grey covers an area of 2,515 square km and includes several municipalities like Blue Mountains, Collingwood, Essa and Springwater. The region, population 129,945, was a popular place for immigrants to settle. According to the 2016 Census, more than 100,000 are of European descent. The district’s Italian population, at 9,255, represents about 7% of all residents in Simcoe Grey. (See graph above)

That year, Wilson resigned from his cabinet position and the PC caucus to seek treatment for addiction issues, according to a statement from the Premier Office. He currently sits as an independent and is not running for re-election.

Instead, Premier Ford appointed Brian Saunderson as the riding’s PC candidate. The Collingwood Mayor announced he would take a temporary unpaid leave of absence starting April 20 to focus on the election campaign. Also on the ballot is Liberal candidate Ted Crysler. Thus far, the NDP have not yet declared a candidate for the riding. 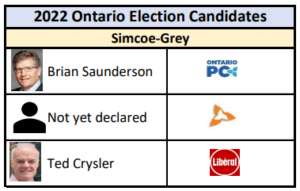 Although there will be different names on this year’s ballot, electors have mostly voted PC.

The latest polls suggest little has changed. The PC are well in the lead at 51% (as at March 27), according to 338Canada.com, a statistical model of electoral projections based on opinion polls, electoral history and demographic data. The Liberals sit at 22% with the NDP further back at 16%. 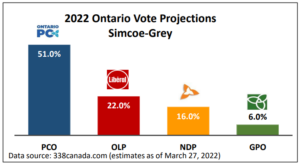