The food waste problem and the offending culprits 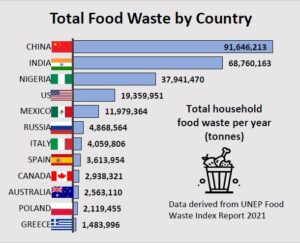 Food is essential to our survival. With food prices on the rise, roughly two out of five Canadians have altered their behaviour when shopping for groceries, all in an effort to save money. While it costs more to feed our families, it may also cause us to reflect on how much food we waste.

According to the United Nation’s Environment Programme (UNEP) Food Waste Index Report 2021, it is estimated that on a global level, food waste totals 931 million tonnes (Mt) annually. That wastage includes food waste from households, the food service industry and the retail sector. 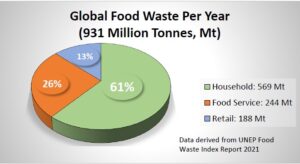 Households generate more than 60% of total food waste, nearly 570 Mt. Within the home, each individual creates an average of 74 kg of food waste annually. That is equivalent to a bushel of about 300 apples or roughly 10 legs of prosciutto. Who would want to waste such a thing?

As some people go hungry around the world, others are wasting a vital basic need. The prevalence of such waste varies among countries. Several factors contribute to the wastage including the availability of food and the storage mechanisms in place.

The UNEP Report indicates China as the country which generates the largest household food waste at more than 91.6 Mt per year. Not surprisingly since it is the country with the highest population, 1.4 trillion. Other countries among the top food wasters include India and Nigeria with an estimated 68.7 Mt and 37.4 Mt per year respectively.

When it comes to North America, the top contributor of food waste is the US at over 19.3 Mt annually, followed by Mexico, at nearly 12 Mt and Canada at 2.9 Mt.

Things look a little different when observing the issue from another perspective. For example, the Report shows that each person in Canada generates an average of 79 kg of household food waste per year. It can be said that Toronto, the most populous city in Canada, with 2.9 million residents, is considered to be one of the nation’s jurisdictions most affected by food wastage. 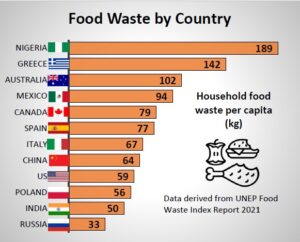 European countries which fall below the global per capita average (74 kg), include Italy, at 67 kg, and Poland at 56 kg. Still, these figures are rather perplexing since most European families come from a culture of utilizing and reinventing every morsel of food so there is little to no waste.

On a global scale, about one trillion dollars’ worth of food is wasted every year. Critics argue this issue is not only unethical in a world where famine exists, but it also has a significant impact on global warming. When food rots in landfills, it emits greenhouse gases which damage the environment.

Measures like finding new ways to distribute food, reinventing leftovers and only buying the food you need could help lower the global impact of food waste. These collective efforts may in turn, help fight global hunger and climate change.

Something to think about the next time you think of tossing that leftover slice of pizza.

It will be easier for immigrants to work in their professions