The revitalization of Ontario Place 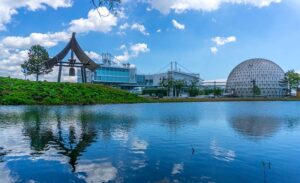 After it’s closure in 2012, Ontario Place, Toronto’s iconic waterfront attraction, was left underutilized and a sad reminder of a once major tourist destination. Hopefully, that’s all about to change.

The plans to redevelop Ontario Place, announced July 30, include new facilities and activities to be enjoyed and utilized year-round. The revitalization project will incorporate three new major attractions within the 155-acre provincially owned lakefront property.

According to plans released by the Ontario government, Therme Group will build Therme Canada on the western part of the island. It will operate as an all-season resort offering amenities for the whole family. The concept attraction includes “pools, waterslides, botanical spaces to relax, as well as sports performance and recovery services”. (see site map below, credit: Ontario.ca) 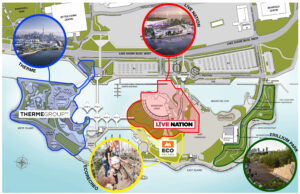 Plans also incorporate more than eight acres of free outdoor space: parkland, gardens, beaches and gathering spaces accessible to the public. This phase of the project may create more than 2,200 local construction jobs with an additional 800+ new jobs when the facility opens.

Another participant in the revitalization project is Écorécréo Group. Its plans include the construction of a year-round environmentally-friendly adventure park for all ages open. Some activities include aerial obstacle courses, ziplines, escape rooms, climbing walls, as well as, rentals for equipment like canoes, kayaks and Segways to explore the water and grounds around the park.

Live Nation will redevelop the existing concert venue into an indoor/outdoor performance facility also to be utilized throughout the whole year. While preserving the outdoor amphitheatre lawns, the new event space will have capacity to accommodate 20,000 guests in the summer. With the use of retractable walls, the space will entertain 9,000 guests during the winter months.

The plans for this redevelopment comes after failed attempts to use the lands to build a waterfront casino. But what of the Cinesphere and pod complex? These iconic features will be “retained and integrated” into the revitalization project. The province is working with the Ontario Science Centre to create opportunities for science-related tourism and educational programs to be offered at the facilities.

Since its decommission in 2012, the grounds have been open to the public to stroll around the marina, Trillium Park and William G. Davis Trail (opened 2017). These features will remain as part of the new Ontario Place for the public to enjoy.

During Friday’s announcement, no cost estimate was revealed for the total project. However, the province expects the private investors will contribute up to $500 million to the redevelopment plan. There was no indication how much it will cost the Ontario taxpayer.

After opening in 1971, the Ontario Place welcomed roughly 3 million visitors annually at the peak of its operations. The province expects the redevelopment will create over 3,600 construction jobs and staff positions once the facilities and attractions open to the public. The new site is also expected to attract about five million visitors annually.

The next phase of the project will include public engagement for Ontarians to express how they would like to experience the revitalized Ontario Place. Further consultation regarding environmental and heritage assessment will follow this coming Fall. Construction is expected to begin in 2024 with completion between 2027-2030, nearly sixty years after it first opened.