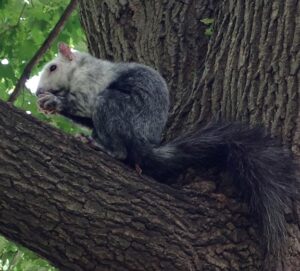 An animal, which should have died over the winter because the odds were against it, was found to be still alive. In defiance of a raging COVID-19 pandemic, an unrelenting winter, food shortage and predators, the Elton John song “I’m Still Standing” comes to mind. This is a feel-good story; we could use more of those these days.

In a Toronto park that should remain unnamed, to avoid swarming of Instagram spectators, a black squirrel has gone white. A cute novelty or did something go awry?

For this to be a true Albino, it would need completely white fur and red eyes due to an absence of melanin pigment. This inherited genetic trait ranges from 1 in 20,000 to 1 in 1,000,000 in the wilderness.

Because this squirrel still has black fur and black eyes, it falls into the category of “Leucism” and this is where things get interesting. There is a genetic component involving the mis-development of neural crest-derived cells that could lead to nerve and organ damage. Parts of the chromosome (alleles) may have single nucleotide substitutions or larger deletions. This is like having missing letters in a word or missing key sentences in a paragraph.

Leucism is also the result of a rotten environment – a rotten home and a rotten diet. What started as one squirrel’s story of triumph is now becoming a story of concern for humankind. If squirrels are getting sick because of some disbalance in their immediate environment, it is only a matter of time before humans also start to suffer from this imbalance. We live and breathe the same air; we walk along the same grass and concrete. We share the same space.

The Globe & Mail just reported that squirrel infestations have risen by 30% by virtue of the fact that there are less cars out on the road now running over squirrels and more people working from home are encountering them within their domicile.

Here is something to keep you up at night: In July 2020, CNN reported a squirrel in Colorado testing positive for Bubonic Plague – the same disease that wiped out 50 million people in the mid-14th century. The bacteria Yersinia pestis is spread by fleas.

The leucitic squirrel I spotted the other day was scratching itself all over. It was even biting its own tail. Its inflamed skin shone through its white fur.

And the locals continue to visit it every day. They offer it walnuts from the palm of their hand.