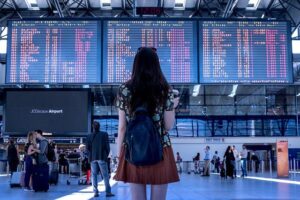 TORONTO – Airport chaos: Federal Minister of Transport, Omar Alghabra, called to testify before August 19 by the Transport Committee to explain airport delays and flight cancellations in the main Canadian airports in recent months.

In fact, on Monday, the Transport Committee held an emergency meeting to discuss the request of conservative Melissa Lantsman, CPC Transport Critic, to have Alghabra appear before members of the committee to answer their questions about the chaos in Canadian airports.

Among the issues to be addressed, Lantsman has included the ArriveCAN app and the measures restored for travelers in the wake of the seventh wave of Covid-19. She also asked for the meeting to be televised to all Canadians to see the minister’s testimony. Liberal members of the commission have no resistance to the conservative motion.

Minister Alghabra will therefore be heard as airlines and airports grapple with a surge in travel this summer, exacerbated by the lack of staff affecting both carriers and federal agencies. This has led to widespread flight cancellations, baggage delays, and lengthy lineups.

In filing her motion, Lantsman specifically noted that Toronto’s “Pearson” airport was recently ranked by international media as the worst airport in the world for federal flight delays and said the government federal was informed well in advance of this “predictable mess”.

“We knew traffic would increase this summer, we already knew it in April. I think at this point it is unacceptable for the government to be taken by surprise or to keep telling Canadians that ‘we are working on it’. We believe the minister should address the critical issues of our airports so that Canadians can understand that the government is doing whatever it takes to fix the mess and not simply wait for the peak season of our travels in an attempt to abdicate their responsibilities” .

The situation at Toronto’s “Pearson” made headlines around the world: data collected by the FlightAware flight tracking site revealed that more than half (52.5%) of the airport’s scheduled flights were delayed between May 26 and July 19.

Last week, however, Transport Canada released an update showing that progress has been made: 86% of passengers reported being screened within fifteen minutes by the Canadian Air Transport Security Authority between 1 and August 3, a slight improvement from 84% in the week of July 25 to 31. Furthermore, the number of aircraft detained on the runways has “drastically decreased” since the beginning of May: in the week from 25 to 31 July, 19 aircraft were detained on the tarmac compared to the “peak” of 373 in the week from 23 to 29 May.

Photo by Jan Vašek from Pixabay