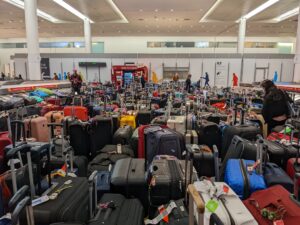 TORONTO – This hot summer, with travels more similar to “odysseys” than holidays continues: long lines, canceled flights, delays and lost baggage are now on the agenda at Toronto Pearson Airport and in major Canadian airports.

“We are seeing the exact same problems occurring in every major airport hub around the world,” Jennifer Weatherhead, founder of travelandstyle.ca, told CTV News on Sunday. “Europe and the United States are also facing many of these problems. Airlines do not have enough pilots to cover flights”. After all, the aviation industry cut thousands of jobs during the Covid-19 pandemic, when the demand for travel plummeted. Now, with the lifting of the restrictions, travel demand has rebounded but staffing levels have not kept up. And the consequences are there for all to see. Consequences that could have been avoided: it was obvious that with the fall of the restrictions there would be an assault on the airports. It was enough to prepare.

There are many testimonies of inconvenience suffered by users in various Canadian airports. An emblematic case is certainly that of Dean, who searched for his luggage for sixteen days after arriving in Toronto. The man told CP24 that he arrived from Calgary on a direct flight, landing at around 12.30am on June 17. For three hours he waited for his bags, to no avail. So, he waited in line for customer service for an hour, but when it was his turn he got no response about his bags. And more than two weeks later, the bags are nowhere to be found. “I’ve been back to the airport three times. And it’s been sixteen days. I’ve looked over and over at these 2,000 suitcases here (dropped off at the airport) to find mine. Nothing” said Dean who is just one of thousands of travelers who desperately searched for their bags at Canada’s largest airport. Thousands of suitcases continue to remain in the Pearson luggage area, waiting for their owners to pick them up.

And meanwhile, on social media, travelers continue to vent their anger by asking airlines to find their bags.

The problem, explains the Greater Toronto Airport Authority, depends on the concomitance of a series of factors: “Flight delays and cancellations, shortages of staff and temporary mechanical interruptions of the baggage system”.

The pic above was posted on Twitter by Moukhtar Nsouli (@mfnsouli) on June 26: “Baggage claim at Pearson Airport in Toronto. Pretty much all @AirCanada flights to the US canceled for the last three days. Let’s try to find our bag”, Moukhtar wrote in his tweet