Massacre on the roads of Ontario, 6 dead and 14 wounded 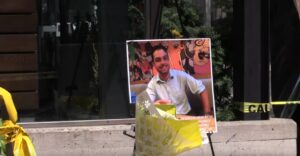 TORONTO – Bloody weekend on the roads of Ontario. From Mississauga to Brampton, from Toronto to Brock Township, 6 people lost their lives while 14 are injured. A war bulletin, after all, the numbers speak for themselves.

Two people died and four others, including a nine-month-old baby, were injured in a couple of incidents that occurred two hours apart in the Peel region during Saturday night.

Two vehicles collided in the first accident at Derry Road and Ninth Line in Mississauga: a 20-year-old man died on the spot while a woman traveling in the same vehicle was rushed to Sunnybrook Hospital in serious condition.

The trail of blood continued in Brampton. In the second incident, near Creditview Road and Wanless Drive, the passenger of one of the two cars was catapulted out of the cockpit and died shortly afterwards in hospital.

Three other people, including a nine-month-old baby, were taken to hospital trauma centers with serious injuries. Police said the nine-month-old baby and father are in good condition, while the baby’s mother is in critical condition. The police are working to reconstruct the dynamics of what happened: some witnesses have stated that a Jeep traveling at high speed would not have stopped at the red light and would have collided with the other car. The driver was arrested on charges of impaired driving.

Two pedestrians were hit on Friday evening during a collision between several vehicles that took place on Wellington Street and University Avenue: for Gregory Girgis, 26, there was nothing to do while the other person, a 32-year-old man, suffered serious injuries. To cause the clash would have been the 26-year-old Nitan Thakur who at the wheel of his Jeep Grand Cherokee would not have stopped at the red light hitting a Honda driven by a 53-year-old man and a Toyota Corolla operated by a 49-year-old. Honda and Toyota then invested In Girgis.

Occupants of the Honda and Toyota were also taken to hospital with minor injuries: Toronto paramedics said they had transported a total of seven people to the hospital.

Two men and a woman died while a woman and a child were seriously injured in a clash in Brock Township on Friday morning. Durham Regional Police tweeted that the serious accident involving two vehicles took place in the area of Regional Road 23 and Thorah Concession Road 4.

Finally, on Saturday night, just before 8 a.m., a cyclist suffered leg injuries after being hit by a truck carrying concrete in downtown Toronto.

It happened in the Adelaide Street West and Portland Street area.

It was supposed to be a weekend to enjoy, this Canada Day, was instead a weekend in which the high accidents on the roads caused a considerable human cost.