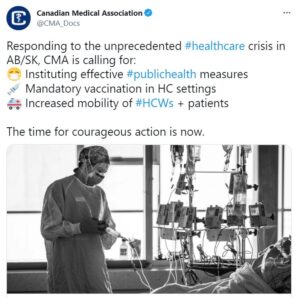 EDMONTON – Alberta and Saskatchewan are collapsing. On Tuesday, Alberta reported 1,246 new cases of Covid-19 and another 18 deaths, following the weekend’s thousands of new infections; Saskatchewan also recorded 446 new infections and 10 new deaths. Numbers too high, in relation to the population of the two provinces (4,371,000 the first, 1,174,000 the second). And, as we have already written several times in the last few days, the hospitals of both are at the limit.

Currently there are 1,100 Alberta inhabitants in hospital with Covid-19, 263 of them in intensive care; Saskatchewan has 311 inpatients, 65 of them in intensive care. An explosive situation, with the ICU beds almost entirely occupied. Explosive to the point of prompting the Canadian Medical Association (CMA) to officially request “extraordinary measures”. Yesterday, the president of the CMA, Dr. Katharine Smart, wrote this letter, published on https://www.cma.ca and relaunched on social networks, which we report in full.

“We are now witnessing an unprecedented health care crisis in Alberta and Saskatchewan – and patients and health workers are experiencing unfathomable choices and consequences. Early relaxation of public health measures has left two crumbling health care systems in their wake and the dire realities are now in full view”.

“What is happening is as heartbreaking as it was preventable. We are now in a situation where it’s all hands-on deck to address the state of crisis. Because at the end of the day, it’s the people of Alberta and Saskatchewan – patients, families, communities and health workers – who are impacted by this. As Canadians, we have a duty and a commitment to come together, especially in tough times”.

“Now more than ever, we must rely on the hard lessons learned and have the political resolve to take the actions needed to restore the health care systems’ capacities and keep populations safe”.

“The Canadian Medical Association is urgently calling on the provincial and federal governments to work together to: increase vaccination rates through mandatory vaccination in health care settings; institute effective public health measures such as ‘firebreakers’ or ‘circuit breakers’ to aggressively control COVID-19 cases; increase the mobility of health workers between provinces and support the safe transportation of patients to other jurisdictions who have ICU capacity”.

“Any and all measures available must be applied to curb the rate of mortality, support workers, and start addressing the consequences of patients’ whose care is now on hold indefinitely. This is a time for courageous action, and for politics to step out of the way of needed collaboration”.

“This is a time for governments, businesses, and citizens to step up and do the right thing. Extraordinary times call for extraordinary measures – and that time is now”.

Both provinces have lower full vaccination rates than the rest of Canada, with Alberta and Saskatchewan only having 73% of the eligible population fully vaccinated. And the anti-Covid restrictions came into effect too late, after an “open for good” summer, according to the slogan of Alberta Prime Minister Jason Kenney.

Prime Minister Justin Trudeau also intervened on the case, announcing that the federal government is ready to help the two provinces. And he added: “I asked my office to contact the prime minister’s officers directly and I hope to be able to speak tomorrow with Premier Kenney – and soon also with Premier Moe – to reaffirm once again our commitment to support the people of Alberta and Saskatchewan who are facing an extraordinarily difficult and heartbreaking situation right now “.

Meanwhile, yesterday Prime Minister Jason Kenney, speaking of the federal aid offered last week, declared that “the Canadian armed forces have minimal sanitary capacity … in medical personnel”. And on the other hot front, that of Saskatchewan, Prime Minister Scott Moe said on a radio talk show that his province “may need help soon. We haven’t asked for it yet, but that doesn’t mean we will not do it. We will discuss this week”. And maybe it’s time …