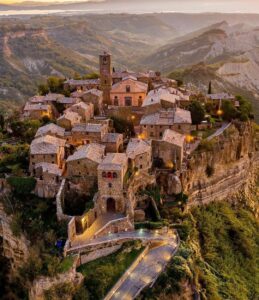 Civita di Bagnoregio – nicknamed “the dying city” – is a magical, surreal place, located on the top of a tuff hill that can only be reached by crossing a narrow pedestrian bridge. This village, where just over ten permanent inhabitants now live, is the new candidate for the prestigious and highly coveted list of World Heritage Sites drawn up by UNESCO.

The candidacy of this village has attracted interest and curiosity all over the world. In addition to the Italian press, articles describing the unusual village and hinting at its rich history have also appeared in major Canadian newspapers, such as The Globe and Mail and the National Post, just to name a few. “When winter clouds are low, Civita looks like a floating castle in the air. On a clear day, the rock on which it rests looks like a slice of a multi-layered cake” can be read for example in the article entitled “Italy’s ‘Dying Town” seeks UNESCO heritage nod “appeared in the National Post on April 6.

The Board of Directors of the Italian National Commission for UNESCO, which is the only body that can formalize a candidacy, has in fact approved as an Italian candidacy to be presented for examination by the World Heritage Committee in 2022 “The cultural landscape of Civita di Bagnoregio “.

As stated on the Commission’s website, “the candidacy represents an exceptional example of human interaction with a hostile environment constantly threatened by natural forces. A site where human ingenuity challenges a territory that for centuries, and still today, is characterized by erosive phenomena that have outlined its iconic nature and influenced its social, cultural, urban and architectural aspects. The exceptional resilience of the community, which has been trying to mitigate irreversible phenomena that have not been interrupted for centuries, substantially contributes to making Civita di Bagnoregio, a cultural landscape of extraordinary importance “.

Centuries ago, the city was much larger and connected to the surrounding area and settlements, but landslides, earthquakes and erosion have reduced it dramatically, geologist Luca Costantini told Reuters. “Over the course of three millennia, regressive erosion has practically reduced Civita to a nucleus, leaving the square and some streets around it,” said Costantini. The Civita that remains today is largely from the medieval period and measures around 150 meters by 90 meters, making it smaller than two football fields. The town’s main square is about the size of a basketball court. “Our motto is ‘resilience’ because Civita was founded by the Etruscans, it went through the Roman era and the entire medieval period to get to the present day,” said Luca Profili, 32, mayor of Bagnoregio, of whom Civita is part. “This place is so fragile,” he said. Since 2013, admission is subject to a fee, also to help protect the fragile landscape. The mayor’s spokesman, Roberto Pomi, said Italy submitted a proposal for the heritage site in January and expects UNESCO to decide in June next year.

But this little gem perched on a friable cliff that began to sink at the end of the seventeenth century has all the credentials to be able to become part of the world heritage sites. Before the pandemic, Civita was an attraction for tourists travelling between Rome and Florence. Who knows if this village, unique of its kind, will be able to convince UNESCO experts.

Covid-19 cases on the rise across Canada

Massacre on the roads of Ontario, 6 dead and 14 wounded