Doug Ford to the Auditor General: “Stay in your lane” 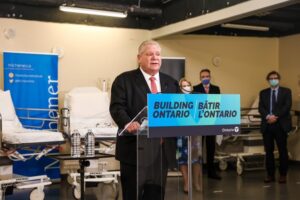 TORONTO – About the waste of vaccines in Ontario denounced on Wednesday by the Auditor General, Prime Minister Doug Ford “wiggles”, but he still sent a loud and clear message to Bonnie Lysyk: “Stay in your lane”.

At today’s press conference, organized to present a “plan” to strengthen the presence of specialized nurses in the province, Ford answered questions from journalists, which inevitably ended up on the very harsh report by the auditor general, the day before yesterday, focused on the management of the Covid emergency by the provincial government: from that report, a clear situation of chaos had emerged during the pandemic, with the lack of widespread and efficient planning especially on the front vaccines and personal protective equipment. In fact, according to the report, since the vaccines became available in Ontario – mid-December 2020 – 3.4 million doses have been wasted in the province, equal to about 9% of the total, left unused and expired. Not to mention the millions of dollars thrown away on unusable personal protective equipment.

Ford, today, did not reply to the accusations but took another path to reply, however, to Bonnie Lysyk: in fact, he harshly criticized her action to ascertain alleged money laundering in Ontario casinos, through the sending in the same of “mystery shoppers”. An operation that actually failed and, in one case, even ended badly: in a casino, in fact, the “mystery shoppers” hired by the Auditor General for this “secret operation” ended up in the crosshairs of the Provincial Police, finding themselves under investigation precisely for money laundry. “These poor fellows are now banned from casinos” Ford said today during the press conference, calling Bonnie Lysyk’s move a “mission creep,” which also “exceeded the jurisdiction of the police”.

And then: “The auditor general needs to stay in his lane and focus on where there is a waste of money” Ford said. “She can’t, all of a sudden, fill you in law enforcement and think she’s the Secret Service, going around and doing operations that have failed, by the way”.

In the end, the premier used the classic “carrot and stick”: “I welcome the auditors – said Ford – who have the opportunity to dig deep and check the sectors of the administration: I welcome it. But they have to stay in their lane” he concluded.