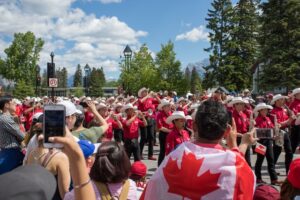 TORONTO – It could be the first “normal” Canada Day, after two years of pandemic, with parties and parades everywhere, but it won’t. In fact, in several cities of the country, the increase in security costs and at the same time the absence of government funding led to the cancellation of the celebrations. In Montreal, for example, there will be no parade for the third consecutive year: the first two years was the “fault” of Covid-19, but now …

“The parade receives a subsidy – said the organizer Nicholas Cowen – and this year the funding was supposed to hit the prices of 2022”, but this time the Federal Department of Heritage has offered less money than in the past, and just in the year in which inflation is skyrocketing. The direct director of the parade, Caroline Polcsak, explained in an interview the price of the insurance is added along with almost everything else, right down to the ingredients of the large traditional cake that is served to the public. And private sponsors are hard to find because parades offer no income. “For the parade, that means less money and higher costs,” Cowen added. Result: Canada Day celebrations in Montreal will be limited to events such as games, face painting and concerts.

But Montreal isn’t the only city where Canada Day organizers have found themselves forced to cancel parades due to the rising cost of insurance and security. In Strathcona County, Alberta, Sherwood Park and the Chamber of Commerce have announced that the Canada Day Parade will not take place. “Unfortunately, the risks associated with the parades have increased and, therefore, the insurance burden on the organizers of the event,” said executive director Todd Banks.

The Vancouver Fraser Port Authority in turn announced that it will not host a parade or present a fireworks display this year, citing “rising costs for security and across the events industry,” adding that it instead focused “on other events “.

Also in Banff, Alberta, the parade will be replaced with a day of entertainment. Other cities, such as Winnipeg and Thunder Bay, have chosen to celebrate Canada Day with cultural programming rather than events like parades and fireworks.

Instead, the fireworks in Toronto have been confirmed. Several fireworks will take place in the Greater Toronto Area for those hoping to celebrate Canada’s 155th birthday with a “bang”. In Toronto, the city’s popular fireworks will return to Ashbridges Bay Park, near Woodbine Avenue and Lake Shore Boulevard, starting at 10pm (10pm) on Friday. At the same time, fireworks also at Downsview Park in North York, near Keele Street and Sheppard Avenue West, as well as in numerous other GTA locations.

There remains, for the many Canadian cities that have had to cancel their parades, a great bitterness combined with a doubt: whether the “Pride” parades (not smaller in size) could have been carried out safely, why for Canada Day was it not possible to find the money?

Photo by Andy Holmes on Unsplash