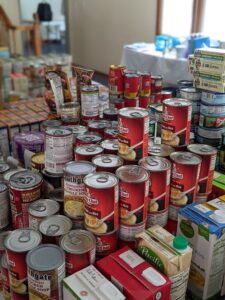 TORONTO – The number of people using food banks across Canada rose to all-time highs earlier this year, with high inflation and low welfare rates being cited by Food Banks Canada as key factors in the increase.

The annual report released on Thursday states that there were nearly 1.5 million visits to food banks in March, a figure 15% higher than the number of visits in the same month last year and 35% higher than in March 2019, before the pandemic arrived.

The report, which examined data from more than 4,750 food banks and community organizations, indicates that the skyrocketing cost of food and housing, as well as high inflation and low social assistance rates, have contributed to increased use of food banks.

Kirstin Beardsley, CEO of Food Banks Canada, called the numbers “devastating.” “The number of people so high turning to food banks is the highest ever recorded in Canada’s history,” he said, “fixed-income groups such as seniors and employed but low-income people such as students have been hit hardest because their paychecks can’t keep up with inflation.”

The report shows that about 500,000 food bank customers – about a third – are children, making up about 20% of the country’s total population. “Hunger among children is a problem that can have a lasting impact – said Beardsley – they are the future of our country, they will be our future leaders, scientists, artists but when you go to school hungry, you are not learning, you are not concentrating, you are not preparing to succeed”.

Food Banks Canada said food insecurity is particularly severe in northern Canada, calling for the development of community-based approaches in those areas to address the problem.

Beardsley called the report a “wake-up call” that should trigger initiatives to address food insecurity and the issues that contribute to it. The report suggests long- and short-term solutions, including the creation of a universal minimum income for low-income Canadians and benefits regarding the cost of renting the house.