You go to jail if you dare to vote: reason for not voting 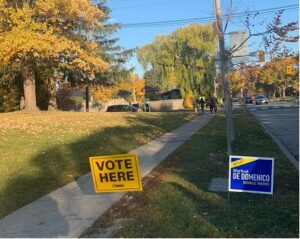 TORONTO – A former cynical colleague of the NDP persuasion once shared this nugget of truth in a friendly political discussion over coffee: democracy is nothing more than a ten-minute exercise in casting a ballot at elections. He could have added… for those who care. Monday’s province-wide participation rate of a mere 27% suggests that not many do.

This despite the fact that election commissioners virtually everywhere seem to go out of their way to make it easy to register as a voter and to vote from the comfort of wherever you like – digitally or in person over a three-week period.

Think about it: 73% of eligible residents (three out of four people over the age of eighteen) could not care less. And they did not even have to “get their a** out of bed” to vote.

Moreover, because municipal election officials in various jurisdictions have no power to seek or enforce qualifications regarding eligibility of citizenship or residency, almost anybody can vote. It is easier to get a voter’s card than it is to acquire a “loyalty card” for shoppers.

Fraudsters can play havoc with legitimacy, virtually with impunity. Officials in various municipalities and provincial Ministries take a hands-off approach until ‘complaint generated’ action is prompted. No one takes responsibility for the single most important event in democratic vigilance and accountability.

As a result, absurdities sprout like fungi in the process. They range from the tragic to the laughable. Anyone with the motivation would turn some of the more egregious local cases into justiciable events.

For example, Scarborough area councillor Cynthia Lai passed some 48 hours before election day; her name stayed on the ballot. It is safe to infer that many would have cast a vote for her in the advance polls and on election day. Those electors were not counted in the final tally.

Further south in Etobicoke Ward two, the priggish, misogynistic, Catholic-hater, “the law applies to everyone but me” incumbent, De Domenico, violated as many election procedures as can be imagined, beginning with launching fundraising campaigns before registration as a candidate, using student resources to develop and distribute campaign style brochures before the election and flouting the regulations regarding the placement of election signs near polling stations (in the pics above and below). 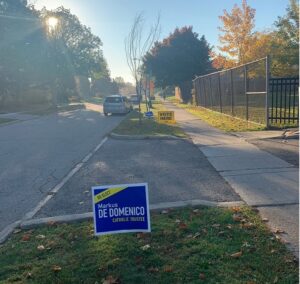 Sunday at dusk, I came upon two Toronto by-law enforcement officers in the act of removing election signs advertising the local Councillor. They professed to be doing so because “a complaint had been lodged”. The signs had been there for at least two weeks. None of the others were removed.

Complaints regarding the “qualifications and eligibility” of two [acclaimed] trustee candidates to French language school boards led to their disqualification by the Electoral Commissioner on the eve of the election day.

In Halton, a former student trustee registered to vote then moved to a university out of town, thus violating the residency qualification. Several candidates refused to provide either evidence that they were “Catholic Electors” as per the definition in the Education Act or the Municipal Act. They “attended Catholic schools, they said, or their children do. Neither qualifies them under the Act to serve on the Board.

Does it matter? Only if you agree that the neighbour across the street can come into your house and shut off the heat and the electricity and moralize about how you should lead your life.