GTA murders, a killer with a long criminal past 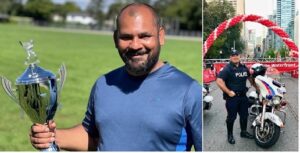 TORONTO – After the initial shock at the cold-blooded killings of Toronto Police officer Andrew Hong and mechanic Shakeel Ashraf (in the pics above) on Monday afternoon, new details about the killer begin to emerge although the reason for the murders remains a mystery.

Today, meanwhile, the funeral of Ashraf, 38, father of two, took place: at the end of the funeral rite the owner of the MK Auto Body Repairs in Milton – where among other things the killer had worked in the past – was buried at the Meadowvale Cemetery in Mississauga. “I don’t know him personally. I know he worked at the workshop about a year ago for a short period of time, I just can’t find an explanation for what happened. Shakeel contributed to the community, donated his time to charities, he was a person with a heart of gold,” said Arslan Hanif, Ashraf’s cousin.

What is clear is instead the great determination of the murderer who after learning that the victim was out for lunch waited for Ashraf’s return and then fired killing him on the spot and injuring three other people.

Less than an hour earlier, the suspect shot and killed Toronto police officer Andrew Hong, 48. Hong was having lunch at a Tim Hortons in Mississauga at the end of a training course in which he had taken part along with several other policemen. The killer was located and killed by police a few hours after fleeing the scene in a vehicle stolen from Hamilton. The date of the funeral of the policeman in force of the Toronto police for 22 years is not yet known.

Two murders, these of Ashraf and Hong, still without a reason while trying to dig into the past of the man who sowed terror for an entire afternoon. A man who, according to the probation records obtained by Global News, had a long criminal history behind him.

In 2010 the Parole Board of Canada stated that Sean Petrie – this is his identity – had previous convictions for violent crimes such as robbery and illegal possession of weapons and also suggested that he had alleged links to armed gangs. “The range of your crimes, as demonstrated by your criminal history, is directly linked to the negative influence of other criminals, including those involved in the gang subculture,” the Board wrote.

Most of his past criminal activity appears to have taken place in the Kipling Avenue, Allen Road and Eglinton Avenue area. The Parole Board of Canada noted in 2010 that Petrie had completed a violence prevention program “with good results” and that he planned to “live with his girlfriend and that he could count on the positive support of the brothers, outside the area where he had perpetrated his criminal acts.”

So many beautiful promises to change life, to give a positive turn to his existence that have never become reality.