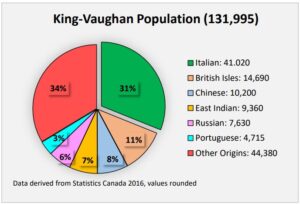 The electoral district of King-Vaughan sits just 40 km north of the City of Toronto. Created in 2015, it is situated in the Regional Municipality of York. The constituency includes the Township of King and the northern part of the City of Vaughan. 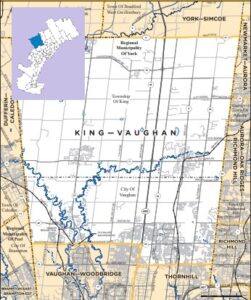 As with other districts in the area, immigrants make up a considerable portion of the local population. Statistics Canada says 41,020 constituents self-identify as Italian Canadian (as per the most recent data available, 2016 Census). That represents 31% of the district’s population. (See graph at the top of the article)

Stephen Lecce, the incumbent, is seeking re-election for the PC and his second term in office. He is the son of Italian immigrants and has represented the riding since 2018 when he won with 56.6% support of the electorate (29,136 votes). The Liberals took 23.3% of the vote, but the PC’s margin of victory was 17,124 votes. That year, the NDP managed only 15.4%.

A spokesperson for Lecce’s campaign shared his Party’s message with the Corriere, “to serve and deliver for families, seniors and the next generation”. The message also included parts of the Party’s platform to cut taxes for anyone who makes under $50,000 per year, eliminate and refund licence plate renewal fees, and help make housing affordable for future generations.

He may have no intention to be a one-term MPP. However, recent revelations, first reported by PressProgress, which stated that he had participated in a fraternity “slave auction” while in university may have an impact on his political aspirations. He was quick to apologize for the inappropriate event.

At a campaign stop in Kitchener (May 12), Ontario PC leader Doug Ford said he believes Lecce is “sorry” for his participation in the event. Despite calls from the opposition for his removal, the Leader indicated that Lecce will remain as the PC candidate in King-Vaughan. It is up to the public to decide how his actions will resonate with them on election day.

Meanwhile, other candidates vying for the post include Gillian Vivona for the Liberals and Samantha Sanchez for the NDP. Neither candidate responded to our request for input as at time of going to print. 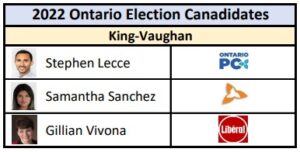 According to the most recent projections by 338Canada.com (May 11), the PC maintain the lead at 49%. The prediction model uses algorithms and considers all major polls. It shows the Liberals at 35% are 14-points behind the PC, followed by the NDP at 10%. 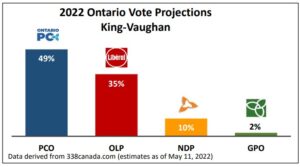