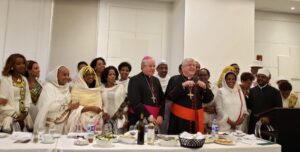 Christians (in particular Catholics practicing their faith in several of their Rites) are numerically the most persecuted in the world. They represent the largest demographic prone to seek refuge from their native soil.

The Catholic Archdiocese of Toronto has earned a reputation for proactively “rescuing” families and individuals from such conditions and locating them in an environment where they can begin to refashion their lives according to the Catholic ethic.

It has a history of such activism. In the mid eighteen hundreds when Toronto was a mere colonial outpost of 26,000 residents, the diocese welcomed and accommodated close to 40,000 Irish refugees many of them sick with typhus and other diseases.

Saturday evening started off with a procession headed by members of the Eritrean Church. They chanted a greeting which shows respect for church leaders. Some 450 Catholic refugees displaced by war and human induced famines from countries in the Greater Middle East and Africa convened to thank Thomas Cardinal Collins for his commitment to their integration in a world where they might be free to pursue a future of their own making. 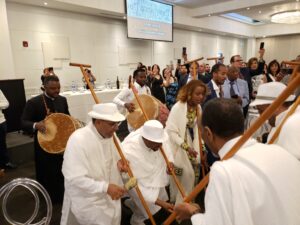 It was an overwhelming display of thanks by Catholics, Coptic, Chaldeans, Melkite, Syriac Orthodox, members of the Eritrean Chaplaincy for the Archdiocese’s work on their behalf. Equally impressive was the number of prelates, priests and parish organizers, including Archbishop Emeritus Lawrence Saldanha, Bishop Mina, Fr. Yousif Al Banna, Fr. Manhal Abboush Habash, Fr. Keflemariam and the Reverend Msgr. Makarios Wehbi, who joined His Grace Archbishop Ivan Jurkovic, the Papal Nuncio to Canada, in their expressions of gratitude. 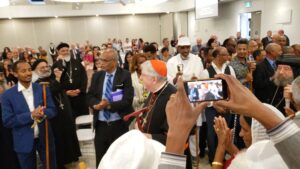 For his part, Cardinal Collins was humble, brief and to the point in his wrap up. We do what we must to be examples of our faith for which we are persecuted internationally. But “locally”, even in countries where peace prevails, we need to be wary of “suppression” in all of its manifestations.

“People should be able to stay in their homeland instead of being persecuted and driven from their homes”, said His Eminence. He also emphasized that the danger here is “not YET persecution”, but rather “complacency and suppression of our Faith”. He also suggested that Canada’s “calm and polite” ways must be followed “with an iron fist”.

Deacon Rudy Ovcjak, Director of the Office of Refugees – Archdiocese of Toronto (ORAT), also acknowledged the tremendous efforts by members of the community which help refugees who have suffered terrible persecution and violence.

According to ORAT, since 2009, the organization has helped resettle 6,800 refugees of which 5,500 have already arrived in Canada. “Lives that have been changed for the better”, said Deacon Rudy. He also acknowledged the momentous undertaking extends to those who suffer from outside of the Christian Faith. With the crisis in Ukraine, he also extended an invitation to those interested in helping host some of the 500,000 refugees expected in the coming months.

Photos/video credit: P. Pajdo (Video: members of the the Eritrean Church chant in procession to show respect to church leaders) 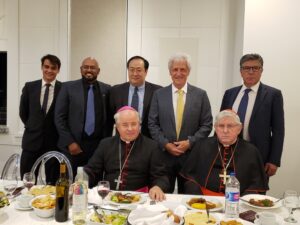