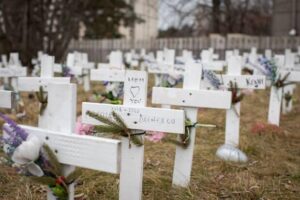 TORONTO – It’s a report pointing the finger in various directions that the Ontario Long-Term Care Commission has presented to the Ontario government.

Forgotten long-term care homes, a sector abandoned to itself and a Covid pandemic that has put the finger in the wound: 322 pages, 700 testimonies, 85 recommendations so that what happened does not happen again.

“Since the SARS epidemic, which dates back to 2003, the province has failed to learn anything, it would be good if this time it paid attention to the advice of experts,” wrote the team led by Superior Court Chief Associate Judge Frank Marrocco. “Despite numerous past reviews, commissions, and investigations recommending improvements, the sector was completely unprepared for the pandemic – denounces the report handed over to the province government – many of the challenges that for decades have occurred in the long-term care sector such as chronic underfunding, severe staff shortages, outdated infrastructure, and poor oversight, have contributed to deadly consequences for Ontario’s most vulnerable citizens during the pandemic.”

But while structural and organizational deficiencies are easily imaginable, what is surprising and disconcerting is that, if the pandemic had been given the right severity in its early stages, 3,758 elderly people would not have died so far. The commission has been highly critical of the slow decision-making process and the “lack of urgency” that Premier Doug Ford’s government showed during the first few weeks of the pandemic: suffice it to say that at the end of March 2020, when outbreaks of the virus erupted in the case, the government has yet to formalize its response. “Without a defined plan, the government found himself inventing its emergency response as it progressed – it says in the report – as is well known, a pandemic is an inappropriate time to create an articulated, well-thought-out and complete plan.”

In addition to the fundamental unprepared action, according to the Commission called upon to investigate, was added in particular that of the Medical Director of Health David Williams, who was too slow to make the necessary choice and decisions on the basis of the information that the man-hand outlined in the serious picture of the situation. “He was reluctant to acknowledge that community spread was taking place, that asymptomatic patients could spread the virus, and that masks would be useful when it comes to prevention.” Words as heavy as a boulder that highlight the inability to play such an important and responsible role.

Williams, it says in the report, “issued directives only after consulting the Deputy Minister of Health and the Covid-19 Command Table”. The delay was deadly,” the commissioners wrote. The province’s chief medical officer and government should not, according to commissioners, “ignore warnings from scientists, doctors, local public health officials, and even the minister of long-term care.”

But even Williams, as chief health officer, is the main “culprit” of a massacre that can be avoided or at least mitigated, the report does not even absolve the work of Ministre Elliott and Fullerton: “The Ministry of Health has not done enough to fulfill its legislative obligation to plan a pandemic, and the ministry of long-term care has not taken sufficient measures to prepare the vulnerable community of long-term care.”

Although the arrival of Covid-19 was unexpected, the Commission believes that was “foreseeable that if a deadly virus spread it would have an impact on the vulnerable long-stay care sector”.

Many of the issues highlighted in the report are not new, but previous governments have not addressed them.

Reports show that experts and advocates of long-term care have repeatedly called for a review of the industry even before the pandemic struck. Many homes are outdated infrastructure and not up to standard while the shortage of staff has been a problem even before the pandemic. The poor design of the facilities and overcrowding of residents have increased illness and death in the case of treatment – the LTC Commission noted – while a severe shortage of staff and a poorly lashed workforce in infection control measures have aggravated the situation. Containing a virus in such a situation proves difficult.”

There were 85 recommendations made by the committee, including preparing for future pandemics and developing plans to tackle outbreaks of infectious diseases. The province must also have a stockpile of protective equipment to deal with epidemics. “As it should have done after the Sars epidemic in 2003, the province must now accept the idea that there will be another pandemic, it is not a question of if but of when”.