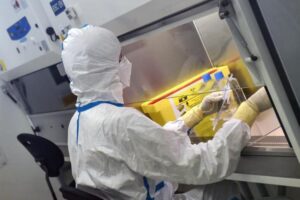 TORONTO – Officially nobody is talking about of it. And this is because the issue – very topical – is hot and complicated and difficult to solve: a mix of explosive characteristics for the political class, which in these days has therefore preferred to stay behind the scenes, if not in some small case. Yet, despite the embarrassed silences of those who govern us and those who, in opposition, should sting the executive on its shortcomings and shortcomings, vaccination obligation is talked about. Experts, virologists, trade representatives of the health and hospital sector discuss it.

Ordinary citizens, those who have been vaccinated and those who see in the resistance of a minority but fierce part of the Canadian population, the no vax, one of the main causes of the health crisis that the country is experiencing at the moment, also talk about it. The fuse was lit last week by the Federal Minister of Health Jean-Yves Duclos, who had invited the leaders of the Provinces and Territories to start a debate on the hypothesis of vaccination obligation. A position that had been strengthened by the intervention of Katharine Smart, president of the Canadian Medical Association, where the need to start talking about it was reiterated.

today the criticism of the Canadian Civil Liberties Association arrived on time, which underlined how in its opinion the possible imposition of the anti-Covid vaccine on the entire population would represent a violation of constitutional principles and would therefore be illegitimate and illegal.

At the moment the only other prominent politicians who have addressed the issue are Jason Kenney and Scott Moe. The two conservative prime ministers of Alberta and Saskatchewan have essentially rejected the proposal of the Federal Minister of Health: while encouraging vaccination as the most effective tool to combat Covid-19 and the new Omicron variant, the two Tory leaders opposed the hypothesis of mandatory vaccination, emphasizing that getting vaccinated must be a personal choice that belongs to each individual.

To provide us with a faithful snapshot of how the relationships between vaccinated and unvaccinated are deteriorating is what Quebec’s College of Physicians has found.

The president of the association of the French-speaking province, Mauril Gaudreault, took stock of the seriousness of the situation, with the Omicron variant that is jeopardizing the functioning of the entire provincial health system with words that have once again thrown gasoline on the fire. “The vaccinated population – he wrote on a letter published on the organization’s website – can no longer suffer in silence, while the unvaccinated occupy one in two beds in the hospital and the majority of beds in intensive care.

In his opinion, a turning point is needed in the protection not only of Covid patients, but also of all those who cannot receive the necessary care – surgical operations, therapies – in the hospital because the wards are full of unvaccinated people. Gaudreault does not go so far as to ask for the vaccination obligation, but all his reasoning leads in that direction. It remains to be seen whether the rest of the country will also feel the need to address such a thorny and divisive issue.