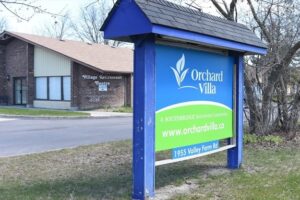 TORONTO – A resounding no to Orchard Villa requests. The Ontario NDP is pressing the provincial government to respond in spades to the requests made by the long-term care home Orchard Villa to be able to expand the structure by adding another 87 beds and the license renewed for another 30 years. “The request is disturbing for the family members of the people who died in this LTC ,” reads the letter signed by leader Andrea Horwath and Oshawa MP Jennifer French.

That Orchard Villa is a black jersey among the LTC where with the arrival of the Covid-19 pandemic, silent massacres of the elderly have taken place, the numbers attest to this: within these walls 70 residents have died. And precisely in this LTC, owned by Southbridge Care Homes, the Canadian Armed Forces have reported a situation of profound degradation: lack of infection control practices, infestations of cockroaches and flies and above all negligence, abuse and an inhuman abandonment of residents.

“At this moment in Ontario’s history, it is not acceptable for the operator of this home to maintain their current license, much less receive an additional one for additional beds – reads the letter sent to Premier Ford – after having clearly failed to responsibly care for ontario’s elders, a renewal of the license for this private company would be a reward instead of justice invoked as a result of what every citizen of Ontario has seen it happen in this facility”.

To bring to light a work by the staff of the structure devoid of attention, care, sensitivity and respect for the elderly residents was the report drawn up by the Canadian military called to help in six nursing homes at the height of the pandemic. Residents left in their beds with dirty diapers, personal belongings out of their reach, mattresses without sheets, errors of administration or failure to administer medication. And still staff unprepared to use personal protective equipment, cleaning and hygiene in the structure lacking.

The letter still reads that “before the pandemic, Orchard Villa had a level 3 compliance history in the category, the second worst possible, which the ministry classifies as ‘actual harm/risk’.

The NDP says Orchard Villa and Southbridge Care are currently facing four separate lawsuits related to negligence and that Durham Police are reviewing Orchard Villa’s reports and that a criminal investigation is not ruled out. “The renewal of the license must be denied to all the LTC that during the pandemic have not taken care of their residents as due – concludes Horwath – it is necessary to transfer the sector to public and non-profit hands”.

In the pic, the Long-Term Care Home Orchard Villa (toronto.com)