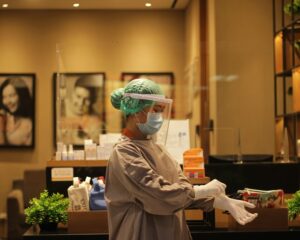 TORONTO – Hospitalizations with or due to Covid-19 continue to increase. Today, infected patients in Ontario hospitals reached 1,090, against 977 on Sunday but above all against 551 on March 22, just twenty days ago. Intensive care admissions are also growing: now 184 beds are occupied by Covid inpatients, compared to 173 today. Some patients are hospitalized due to Covid-19, others for different reasons and test positive at the time of the hospital admission swab (so they are inpatiens with Covid-19).

The positivity rate remains high: 17.6%, calculated on the basis of 2,401 new cases detected out of the 12,149 tests carried out in the last 24 hours, even if these figures represent underestimates by virtue of the fact that the tests are limited only to the categories “a risk”. The active and known cases in Ontario are, officially, 31,703 but certainly the number is far higher.

Another 3 deaths, today, bring the total of victims, since the beginning of the pandemic, in Ontario, to 12,566. Always considering the entire pandemic period, Ontario has so far recorded 1,198,319 laboratory-confirmed cases of Covid-19, of which 1,154,050 recovered.

Also Quebec has now exceeded 1 million cases since the start of the pandemic, which today reached 1,000,895 (of which 956,080 recovered). Cases of today are 2.234 but even here the tests are limited only to the “at risk” categories. Closer to reality, the count of the results of the quick do-it-yourself tests performed at home by citizens and by them included in the portal specifically activated by the Quebec government: today, of the 1,218 results entered, 987 were positive. Since the self-declaration portal was activated, out of the 167,491 results entered, the positive ones are 135,687.

The positivity rate, however, is officially (i.e. on the basis of only tests intended for the “at risk” categories) of 15.9% and active and known infections are 30,271.

Photo by Viki Mohamad on Unsplash